The spot market has shown little change as numerous plants are still offline leading to on-going supply issues. In terms of gas, Norwegian flows are higher this morning and the forecast for slightly warmer weather should help October-13 prices move down. Today's prices can also be found in an easy to read table on our 'current UK energy price' page.

The NBP curve saw numerous losses yesterday thanks to a well-supplied system although Day-Ahead showed no change and closed the session at 66.5ppt. The Day-Ahead contract took influence from weaker Langeled flows which fell to 30mcm which were outbalanced by storage withdrawals of over 22mcm. Seasonal contracts took direction from weaker Brent and dropped by around 0.20ppt on average. Day-Ahead power held its price at £52.75/MWh while most other contracts decreased in price. The weekend weather forecast has predicted higher than average temperatures which has helped prompt contracts move down, while wind generation for today is also above average levels.

Gas contracts moved up slightly while Day-Ahead continued to trade at 66.5ppt as a result of improved temperatures. Maintenance on the BBL pipeline was completed yesterday which helped flows rise to 16mcm and Brent prices rebounded slightly this morning. The power curve displayed a number of gains at the start of the session with Day-Ahead adding £0.25/MWh to its price to open at £53/MWh. The Crauchan pumped storage facility was brought online which led to the system buy price edging above £124/MWh.

Market close data has revealed that the 1-year forward price for both commercial gas & commercial electricity went up slightly - closing at 66.75ppt and £51.78/MWh, respectively. This can be seen in the graph below. 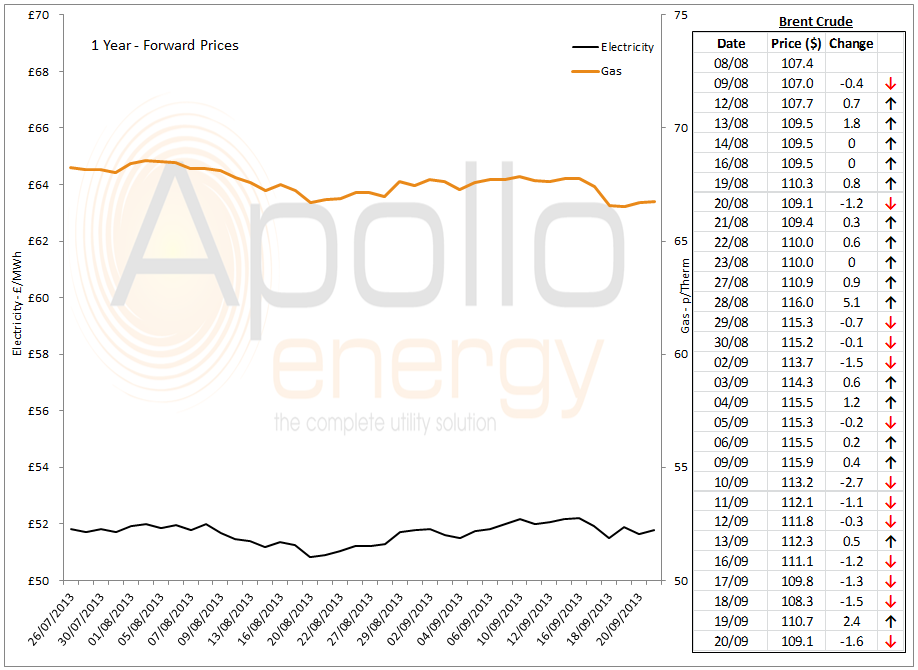 Brent 1st-nearby prices fell below $109/b as a lot of investors stopped buying shares and took their profits following Wednesday's Fed decision. The November delivery contract shed $1.84/b from its price while WTI made a loss $1.68/b.