Spot prices are not expected to decrease in the next few days and should remain firm despite improved renewable energy production. Spot prices went up slightly yesterday due to a fall in thermal capacities as a result of several outages at plants. Gas prices are expected to turn bullish today due to the increase in oil although slightly warmer weather in Europe should limit the gains to an extent, while Norwegian supply levels saw a slight decline giving support to the bulls. Today's prices can also be found in an easy to read table on our 'current UK energy price' page.

On the gas curve, Day-Ahead went up by 0.20ppt as a result of below average temperatures and higher demand levels. Further along the curve seasonal contracts were influenced by the strengthening British Pound and weaker Brent prices; Winter-13 fell by 0.15ppt and Summer-14 made a loss of 0.30ppt. Day-Ahead power increased by £0.30/MWh on the back of numerous outages at nuclear facilities and a lower wind generation forecast. Far-Curve contracts showed mixed direction but the majority of contracts took influence from bearish gas and oil, Summer-14 falling by £0.15MWh.

The gas system opened 8mcm long which led to Day-Ahead registering a loss, the system opened long despite Langeled flows falling from 45mcm to 31mcm. The rest of the curve was bullish as a consequence of Brent making a significant gain of $2.62/bbl. The increase in demand on Fridays and a cooler weather forecast helped Day-Ahead add £0.35/MWh to its price. Meanwhile wind generation is also expected to fall for the rest of this week which gave support to prompt contracts.

Market close data has revealed that the 1-year forward price for commercial gas went up slightly while commercial electricity decreased - closing at 66.73ppt and £51.63/MWh, respectively. This can be seen in the graph below. 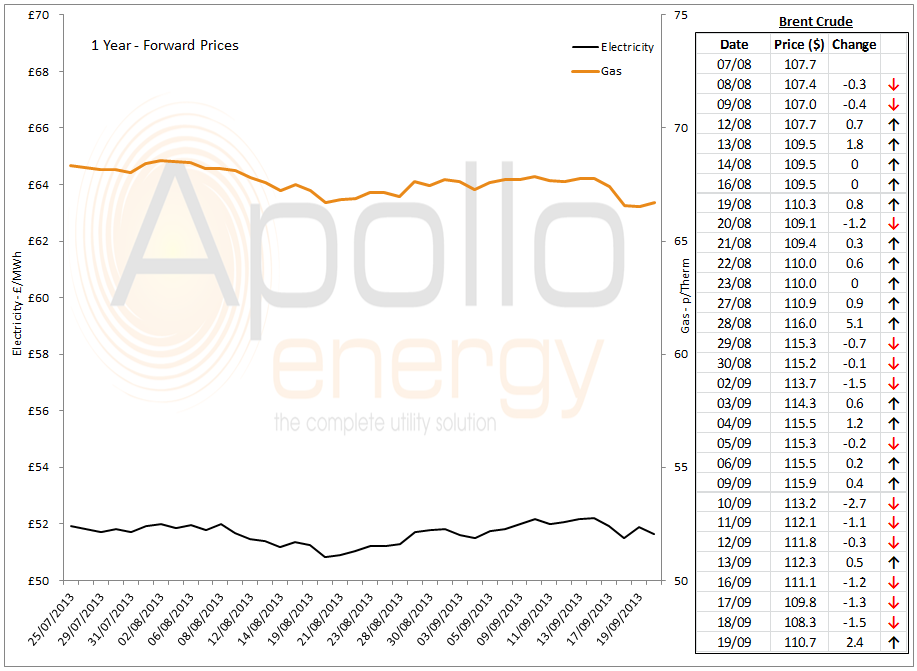 Brent 1st-nearby prices climbed by $2.41 yesterday to close around $110/b due to stronger US stocks and an unexpected decision by the feds to vote against stimulus continuation. WTI also climbed higher and added $2.65/b to its price to end the session at $108.3/b.