Spot prices showed very little movement yesterday as fundamentals hardly changed. Meanwhile mild weather for this time of year is expected over the holiday season and this should reduce demand levels. Gas prices moved down on the back of lower demand and an over-supplied system with Langeled flows almost at maximum. UK LDZ demand has dropped by 4mcm today and is 4% below the seasonal average. In terms of supply, LNG flows have fallen slightly while BBL has increased its output resulting in a long system. Above average temperatures are expected for the weekend and this should continue to weigh on prices. Today's prices can also be found in an easy to read table on our 'current UK energy price' page.

The gas curve closed with a series of gains yesterday with Day-Ahead climbing 0.10ppt higher despite an over-supplied system and Front-Month increased by 0.30ppt. On the rest of the curve the gains ranged from 0.25ppt for Feb-14 and 0.80ppt for Summer-16. Day-Ahead power decreased by £0.50/MWh on the back of a higher wind generation forecast for today. Further along the curve prices took influence from gas and stronger Brent although the upward movement was minimal and ranged from £0.05/MWh and £0.25/MWh.

Gas contracts made further gains this morning with Day-Ahead rising by 0.20ppt, while Front-Month and Front-Quarter showed no change following news of an LNG delivery arriving over the weekend. Flows in general increased and storage withdrawals made up 17% of the supply mix. On the power curve Day-Ahead failed to register any movement while a number of contracts on the far-curve moved higher. Summer-14 added £0.10/MWh to its price and Winter-14 rallied £0.25/MWh higher and took direction from Brent. A nuclear unit at Hartlepool is expected to return online over the weekend and both interconnectors have increased their flows to the UK.

Market close data has revealed that the 1-year forward price for both commercial gas & commercial electricity registered a gain - closing at 68.37ppt and £53.28/MWh, respectively. This can be seen in the graph below. 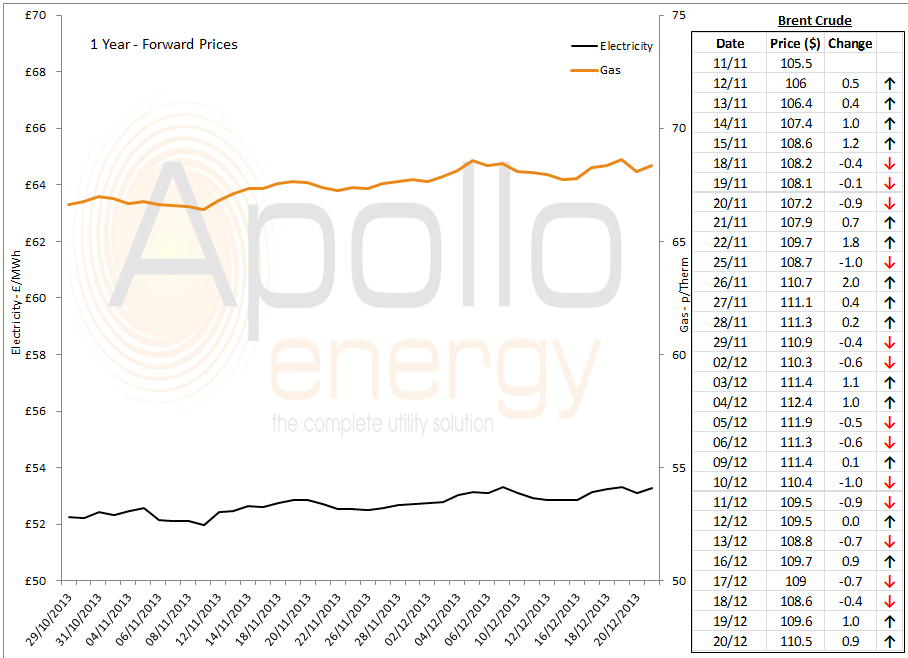 Brent 1st-nearby prices closed above $110/b yesterday following political concerns in Iran and a positive reaction to the latest Fed report.