Demand levels are rather low and supply is healthy as we enter the New Year as temperatures remain mild in Europe. The UK is reliant on wind generation over the winter period although nuclear and lignite production is healthy; prices are expected to decrease further as a result. Minimal market movement over the Christmas period and continued mild weather has helped gas prices fall with low demand helping to replenish storage levels. Prices should see further bearish movement as the above average temperatures look set to continue. Today's prices can also be found in an easy to read table on our 'current UK energy price' page.

Most gas contracts registered a loss by closing on New Year's Eve with Day-Ahead falling by 0.70ppt on the back of milder weather. Contracts further along the curve displayed smaller losses and took influence from lower demand levels and a strengthening British Pound. On the power curve Front-Month and Front-Quarter contracts moved higher due to slightly stronger Brent prices on New Year's Eve although the gains were restricted by the mild weather. On the far-curve prices fell slightly and took direction from gas with contracts decreasing by £0.10/MWh on average.

Day-Ahead gas climbed 0.40ppt higher this morning despite the UK gas system opening 10mcm long. Front-Month also shed 0.50ppt from its price with March and April contracts displaying similar losses. Low demand is the main driver of the market as gas storage levels are currently healthy and stand at around 88%. In terms of power, Day-Ahead recorded a £1.30/MWh loss as wind generation is expected to ramp up to 8GW tomorrow. The rest of the near-curve saw mixed movement with Front-Month decreasing by £0.40/MWh and March-14 rising by £0.10/MWh. Far-curve prices took direction from gas with the majority of contracts opening at a discount.

Market close data has revealed that the 1-year forward price for both commercial gas & commercial electricity decreased - closing at 67.78ppt and £52.98/MWh, respectively. This can be seen in the graph below. 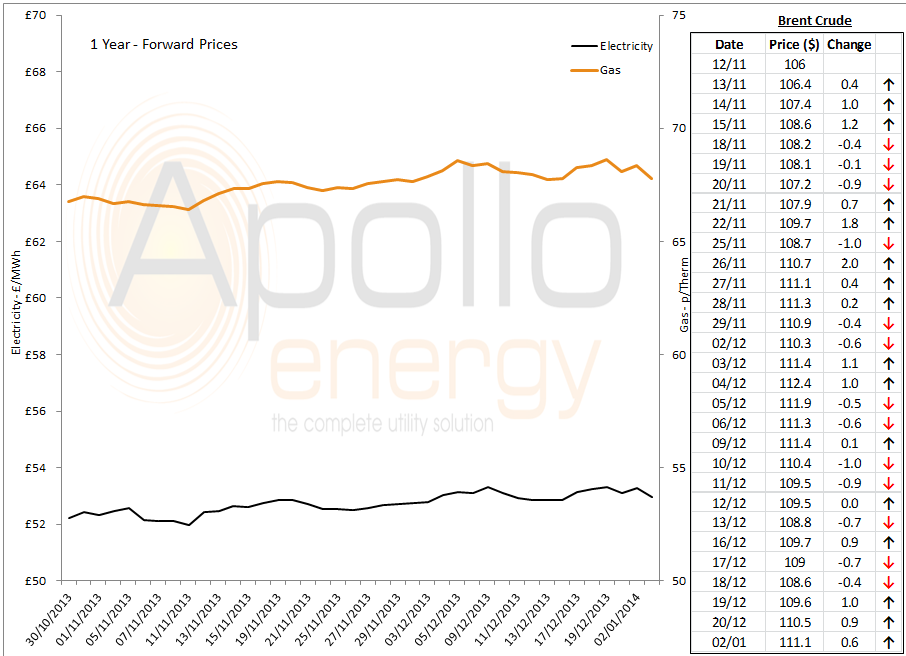 Brent 1st-nearby prices are currently just above $111/b following a drop of $1/b over the holidays; WTI has also fallen and is trading at around $99/b.