Spot prices have increased on the back of colder weather in Europe, however the gains were relatively small today as healthy   supply levels made up for higher consumption. Prices could continue to rise if wind generation and temperatures do not improve. Gas prices also moved higher yesterday due to the lower temperatures on the continent and ignored the long UK gas system, with storage withdrawals at maximum capacity. Today UK LDZ demand is 7mcm higher and is above the seasonal average for only the second time in January. The UK gas system remains over-supplied due to significant storage withdrawals but it is the colder weather which continues to drive the market. Prices are expected to increase further, also helped by strengthening Brent. Today's prices can also be found in an easy to read table on our 'current UK energy price' page.

Gas contracts increased yesterday with Day-Ahead climbing by 0.45ppt and Q4-13 closing 0.10ppt higher. Some seasonal contracts registered a loss with Winter-15 decreasing the most, shedding 0.20ppt from its price; the bearish trend was supported by a strengthening British Pound. Near curve power contracts followed a similar direction to gas although the gains were less prominent. A coal plant suffered an outage which helped prices move higher except Day-Ahead which showed no change. Further along the curve the changes were mixed, displaying both minor gains and losses.

Further gains were recorded today on the gas curve with Day-Ahead rising by 0.15ppt and Front-Month opening at a 0.40ppt premium. Demand levels and UK LDZ consumption is forecast to increase and helped the bulls take control of the curve despite a long system and healthy gas flows. Langeled output is around 72mcm and hasn't seen flows of less than 60mcm since the beginning of December. Day-Ahead power added £0.90/MWh to its price and the rest of the curve also followed an upward trend. February-14 opened £0.35/MWh higher while EUA and CER contracts fell on the back of numerous objections in regards to carbon backloading. Gas-fired generation reached its highest level for 5 weeks this morning and made up for a drop in coal-fired generation following an outage at a unit at the Cottom facility.

Market close data has revealed that the 1-year forward price for both commercial gas & commercial electricity moved higher - closing at 66.28ppt and £51.73/MWh, respectively. This can be seen in the graph below. 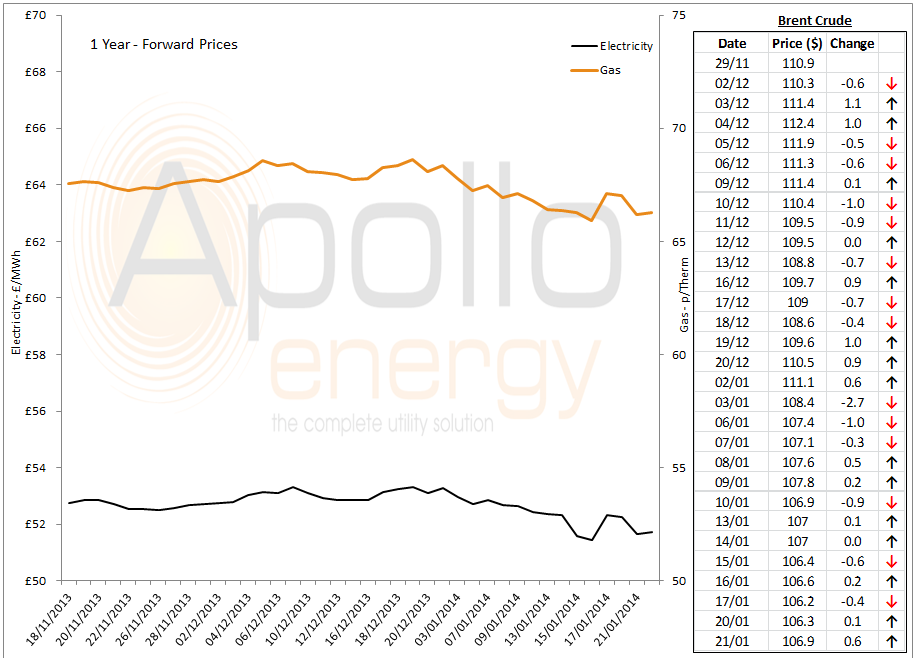 Brent 1st-nearby prices saw little change yesterday as the US markets were closed and there was no progress or regression in terms of production from Libya and Sudan. Today prices are expected to rise according to IMF global growth forecasts and prices could reach $108.3/b.