Spot prices should take an upward turn this week after registering significant losses over the weekend. The weather in most European countries is set to turn colder which will be the main driver of prices as demand levels are expected to ramp up. Gas prices fell on Friday as it was announced that production from the Groningen gas field would be reduced gradually in the next three years; leading to a sell-off at the end of the session. Today UK LDZ demand is 19mcm higher; however the system has opened long thanks to increased storage withdrawals, while Norwegian flows are also healthy. In contrast to the rest of Europe, temperatures in the UK are expected to rise which should weigh on gas prices further. Today's prices can also be found in an easy to read table on our 'current UK energy price' page.

The gas curve displayed numerous losses as the cuts made at the Groningen gas field were lower than expected. Day-Ahead fell by 1ppt and Front-Month decreased by 0.70ppt, while bearish movement was also recorded further along the curve as a number of contracts moved down. Power contracts failed to take a clear direction on Friday with Day-Ahead closing at a £0.50/MWh premium on the back of a colder weather and reduced wind generation forecast for this week. Further along the curve prices recorded losses of up to £0.80/MWh as the restart of a nuclear reactor as Dungeness is expected earlier than scheduled.

Most gas contracts fell this morning as storage levels remain healthy, currently 4% higher than they were at this time last year. Summer-14 and Winter-14 have also moved down on the back of this positive supply picture. In the UK, temperatures are expected to be slightly colder at the beginning of this week but should become milder again before the weekend. Day-Ahead power decreased by £0.85/MWh as power contracts were influenced by weaker gas prices and a rise in wind generation which has been forecast for tomorrow. Nuclear availability has also improved following the return of a nuclear plant, while stronger APi2 coal and Brent had little effect on the market.

Market close data has revealed that the 1-year forward price for both commercial gas & commercial electricity decreased - closing at 66.18ppt and £51.65/MWh, respectively. This can be seen in the graph below. 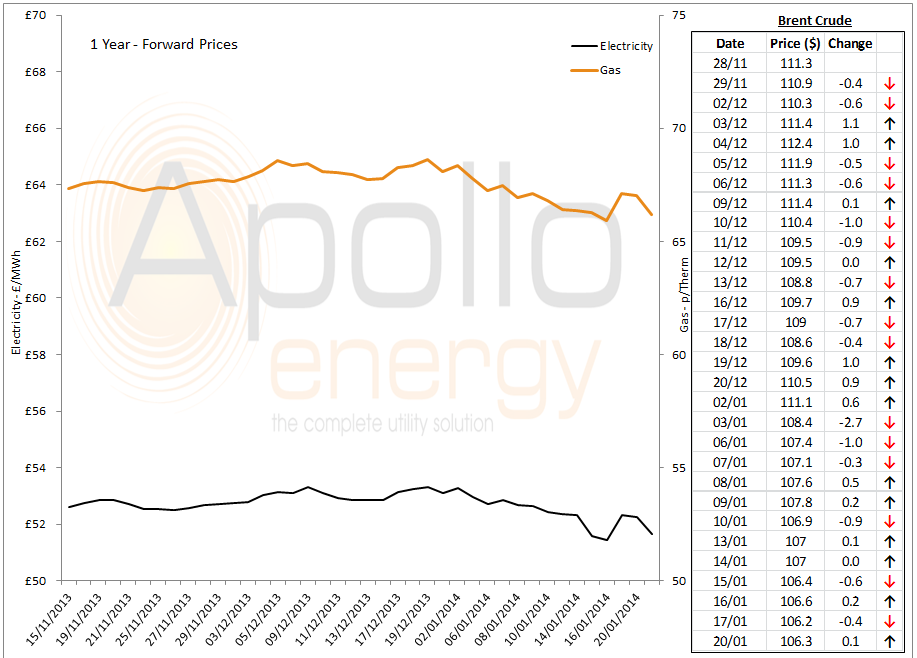 Brent 1st-nearby prices moved lower on Friday and fell by $0.61/b, opening this morning's session at $106.2/b. Meanwhile the Brent/ WTI spread currently stands at -$11.16/b with Middle Eastern tensions currently affecting the market.