Spot power prices decreased yesterday on the back of a warmer weather and improved supply forecast. Today's movement is mixed with some contracts following rising gas and others taking influence from stronger nuclear and renewable generation. Gas prices moved higher yesterday following significant losses on Friday as overall supply levels declined and resulted in a short gas system, despite low demand. Slightly cooler temperatures are expected across Europe next week which has offered support to gas contracts this morning, while current supply levels are stable; small gains can be expected this afternoon. Today's prices can also be found in an easy to read table on our 'current UK energy price' page.

The gas curve displayed a series of gains yesterday due to reduced supply levels and stronger exports from the UK to Belgium which led an undersupplied system.   Scheduled maintenance at Norwegian pipelines and facilities continues to affect UK supply with work now expected to be completed by the 28th of April. Most power prices ignored stronger gas and numerous losses were observed across the near-curve. Warm weather was the main cause for this bearish movement as consumption levels are expected to fall further.

Day-Ahead power has displayed a slight decrease this morning as short term generation levels are on the rise and warm weather has reduced demand. Meanwhile, movement further along the curve is much more bullish as contracts have taken direction from their gas counterparts. Gas prices have opened at a premium this morning as supply levels remain low due on-going maintenance in Norway; the UK gas system remains short as a result. However, the gains were slightly restricted by a healthy LNG outlook.

Market close data has revealed that the 1-year forward price for both commercial gas & commercial electricity increased - closing at 47.68ppt and £45.33/MWh, respectively. This can be seen in the graph below. 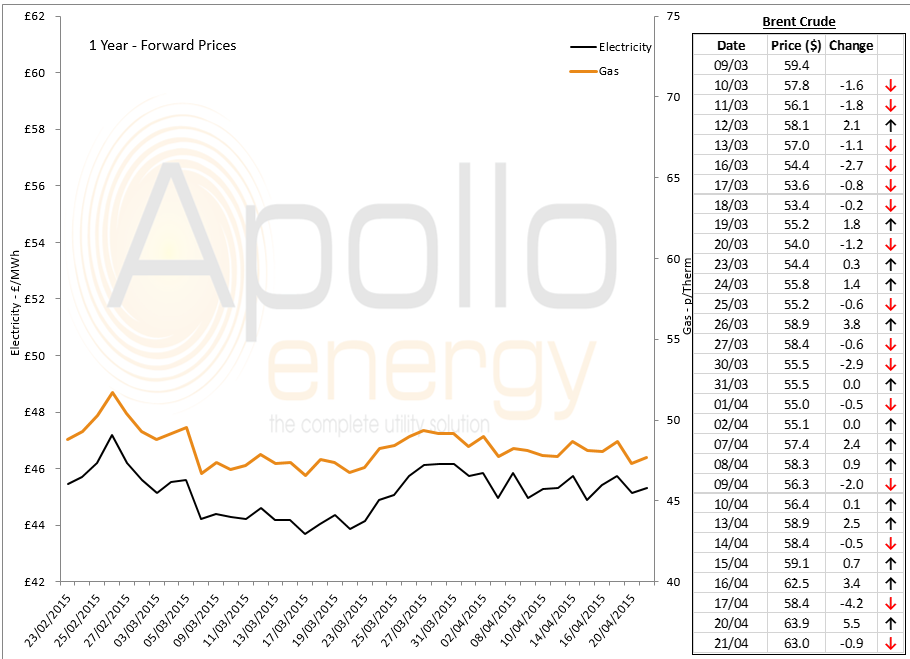 Brent 1st-nearby prices encountered another volatile session yesterday displaying strong movement in either direction before settling just below $63/b.