Spot power prices posted losses yesterday as supply levels are expected to improve, with a stronger wind generation forecast for next week and improved nuclear availability today. Gas prices increased yesterday as Norwegian gas flows into the UK remained low due to maintenance at the Kollsnes processing facility and the Troll pipeline. Cooler temperatures are expected to hit Europe next week which has offered some support to the near-curve but an improved supply outlook has resulted in numerous losses. Today's prices can also be found in an easy to read table on our 'current UK energy price' page.

Gas prices displayed limited upward movement yesterday with the gains more prominent on the near-curve due to weak supply and increased exports to Belgium. A healthy LNG outlook restricted some of the gains, as did falling Brent. Movement on the power curve was largely bearish yesterday on the back of weak demand. However, some contracts were slightly supported by their stronger gas counterparts and a drop in renewable generation.

Gas prices have opened this morning at a discount but overall movement is still rather subdued despite warm temperatures and this is expected to be the case until maintenance ends in Norway. Power prices opened higher this morning as wind generation remains weak and resulted in an extra reliance on expensive gas-fired generation. An expected drop in temperatures next week has also supported some contracts although wind generation is forecast to rise.

Market close data has revealed that the 1-year forward price for commercial gas decreased while commercial electricity recorded a gain - closing at 47.25ppt and £45.46/MWh, respectively. This can be seen in the graph below. 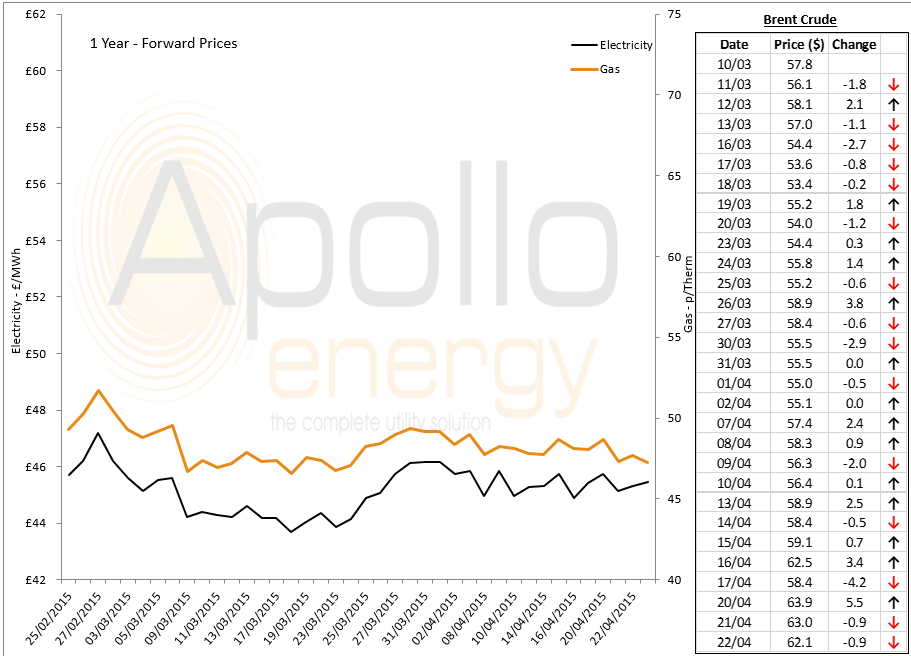 Brent 1st-nearby prices are on the decline as tensions in the Middle East have eased following a decision by the Saudi Arabian air force to stop its strikes on Yemen; Brent currently trades just above $62/b.