Yesterday morning saw Front-Month contracts reach their lowest price for nearly a week but the contracts turned bullish in the afternoon. The forecast for German nuclear production is lower while a French nuclear facility has also suffered an outage. Higher coal prices should also lead to an increase in power prices during today's session. The UK gas system opened long this morning but Langeled flows are expected to drop off later in the day. September-2013 prices should remain firm while most gas contracts could go up on the back of stronger oil prices. Today's prices can also be found in an easy to read table on our 'current UK energy price' page.

The gas system was well balanced yesterday following the return of the Langeled pipeline which led to most gas contracts making a loss, except a few Near-Curve contracts which increased due to higher demand and exports via IUK. Day-Ahead went up by 0.10ppt and September-13 added 0.15ppt to its price as a result of higher Brent prices. The power curve saw little movement yesterday with Day-Ahead rising by £0.10/MWh and Front-Month going up by £0.05/MWh as firm carbon prices restricted any gains. Day-Ahead registered a price increase despite the Fiddler's Ferry Coal Plant and numerous other plants returning online following maintenance. How did the energy markets open? A long gas system and slightly warmer temperatures saw Near-Curve contracts decrease this morning. Losses were also seen amongst seasonal contracts but these price drops were limited due to improving Brent prices. 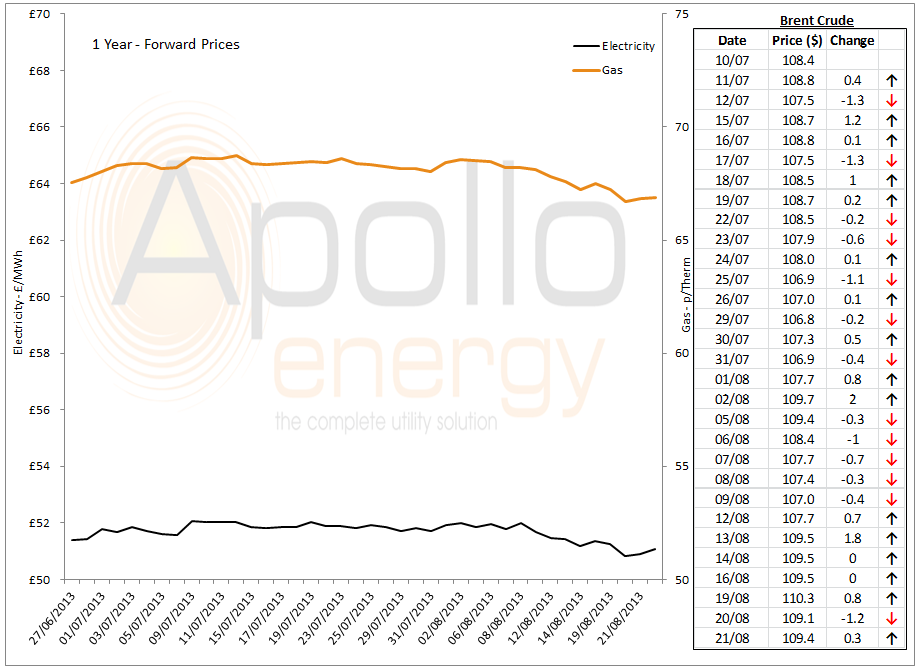 Day-Ahead power opened today's session £0.60/MWh higher and took no influence from bearish gas. The rest of the curve saw varied movement as September-13 and Winter-13 saw little change while November-13 went up by £0.45/MWh as wind generation is expected to decline.

Market close data has revealed that the 1-year forward price for both commercial gas & commercial electricity made a small gain - closing at 66.90ppt and £51.05/MWh, respectively. This can be seen in the graph below. Note: Brent Crude prices are taken from opening market data, and do not represent the price as it changes throughout the day.

Brent 1st-nearby prices hit a high of $110.7/b during yesterday's session with the current troubles in Egypt affecting prices; however prices managed to drop below $110/b later in the day. Following the expiry of the WTI September contract a loss of $2.1/b was made with the October-2013 contract starting its cycle at $104.7/b.