Spot prices made a small loss yesterday but still remain relatively high as nuclear energy supplies and French hydro-production are at low levels. German renewable generation is also limited and is expected to become even weaker in the next few days. The UK gas system opened with strong Langeled flows but they are expected to weaken as the session goes on, however this should be offset by improving BBL flows. The September 2013 contract is expected to decrease today while 1st nearby prices should be supported by stable Brent. Today's prices can also be found in an easy to read table on our 'current UK energy price' page.

Day-Ahead gas fell by 0.45ppt at the start of the session as the system opened 3mcm long and Langeled flows were at a healthy 16mcm after returning online following maintenance. The gas curve turned bullish later in the day as increased exports to Belgium cancelled out the morning losses. Further along the curve prices saw little change despite strengthening Brent. On the power curve, Day-Ahead rose by £0.15/MWh to close at £46.75/MWh on the back of a low wind generation forecast for today. The rest of the curve saw most contracts hold firm with seasonal contracts registering minor price increases despite weaker APi2 coal prices.

Improved flows via the Bacton BBL and Langeled pipelines led to Day-ahead shedding 0.15ppt from its price. The rest of the curve saw only small movement due to stable Brent prices and with little to influence the current economic environment. Winter-13 continued to display a bearish outlook as summer maintenance reaches its conclusion and storage levels currently stand at 80%. Similar to gas, Far-Curve power contracts also saw little movement as the current stability shown in APi2 coal prices and carbon allowances means there is little to influence the market. Day-Ahead fell by £0.45/MWh as coal-fired generation is being used more than gas-fired generation which is expensive in comparison.

Market close data has revealed that the 1-year forward price for both commercial gas & commercial electricity went up - closing at 66.83ppt and £50.90/MWh, respectively. This can be seen in the graph below. 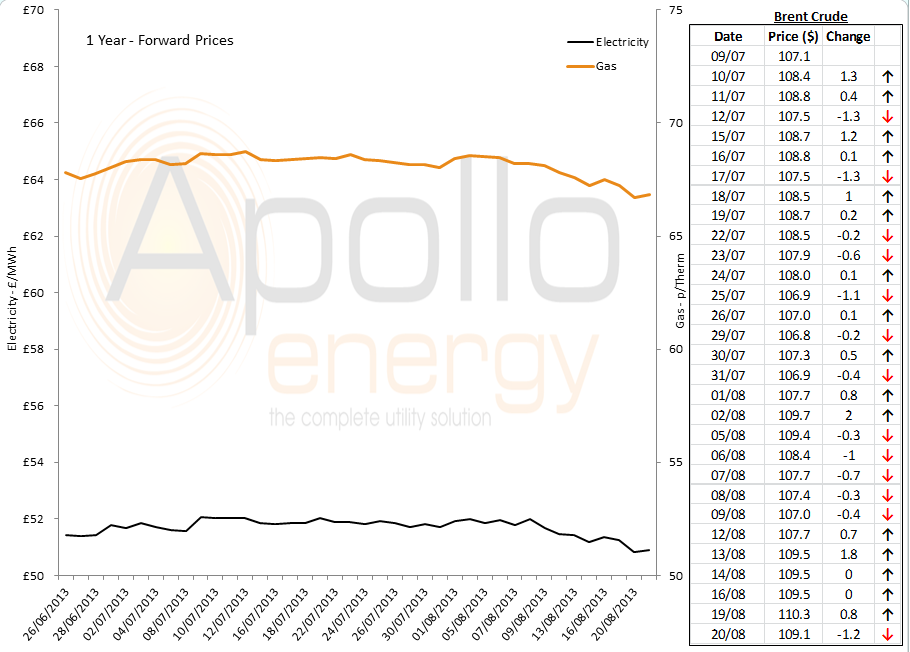 Brent 1st-nearby prices hit a high of $111/b yesterday due to the situation in Egypt but prices have dropped to $109/b this morning. The WTI contract is set to expire today and US crude stocks are expected to have declined last week which will be confirmed in this evening's API report.