Spot power prices have moved down on the back of weaker gas but unplanned outages at two power plants over the weekend have reduced nuclear availability which could result in some bullish movement this afternoon. However, these issues are expected to be resolved tomorrow and wind generation is stronger than expected.

Gas prices traded down on Friday as the Kollsnes processing facility in Norway returned online a day earlier than expected, contributing to higher supply levels in the UK. Prices continue to move down this morning as supply remains strong.

Norwegian imports into the UK increased on Friday following the end of the maintenance at the Kollsnes processing facility, thus helping prices to move down. Brent also posted significant losses in the afternoon, weighing on contracts further along the curve.

Power prices decreased on Friday with downward pressure coming from the weaker gas and oil markets. The Pound also strengthened against the Euro which lowered the cost of importing energy from Europe, further weighing on power contracts.

Gas prices have displayed losses this morning as Norwegian supply is expected to improve this week as maintenance at the Vesterled pipeline is almost complete. However, demand levels remain above average for this time of year and has restricted some of the downward movement.

With the exception of a couple of contracts, movement on the power curve is bearish this morning with wind and solar generation expected to rise this week. Solar power is forecast to be 0.5GW above the seasonal norm, while wind generation is set to rise from 1GW to 4GW later in the week.

Market close data has revealed that the 1-year forward price for both commercial gas & commercial electricity decreased - closing at 41.02ppt and £41.95/MWh, respectively. This can be seen in the graph below. 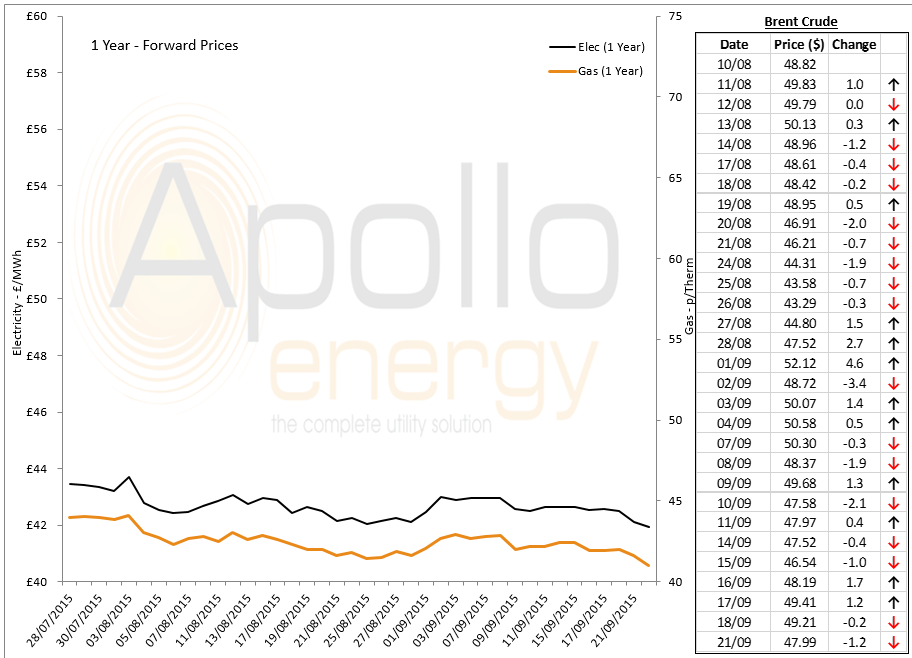 Brent 1st-nearby prices have recovered slightly from Friday's losses and have posted a gain of over $1/b this morning as oil production is expected to fall further based on latest rig count figures.