Spot power prices moved down yesterday on the back of an expected drop in demand over the weekend due to mild weather. The above average weather forecast continues to have an effect on the market today, while nuclear generation is also set to improve on Monday; losses are expected this afternoon. The Troll gas field in Norway suffered an unexpected outage yesterday which reduced imports into the UK to 12mcm, leading to an under-supplied gas system and stronger prices. Lower demand levels on the back of milder temperatures have failed to have much impact on gas prices today as the UK gas system remains under-supplied. Overall gas flows remain low due to the drop in Norwegian production which favours a bullish outlook for this afternoon. Today's prices can also be found in an easy to read table on our 'current UK energy price' page.

Day-Ahead gas failed to take direction from a short UK gas system yesterday and recorded a loss to end the session at 55.85ppt. A mild weather forecast which should result in below average demand levels was the main driver of prices on Thursday. Near-curve power prices displayed small gains yesterday as the system buy price increased to around £124/MWh. Day-Ahead was the session's biggest mover as an expected drop in wind production and the usual rise in demand on Mondays pushed the contract significantly higher.

Overall gas flows have improved slightly this morning as Langeled imports into the UK stand at around 66mcm. Day-Ahead has opened higher than December-14 for the second day in a row which could lead to storage withdrawals. Steady gains were observed across the power curve this morning with some contracts rising by as much as £0.40/MWh. There was little change to the UK fuel mix as gas-fired generation is still providing the bulk of the UK's energy, although three nuclear power units are set to return online at the weekend.

Market close data has revealed that the 1-year forward price for commercial gas decreased while commercial electricity held its price - closing at 56.38ppt and £50.78/MWh, respectively. This can be seen in the graph below. 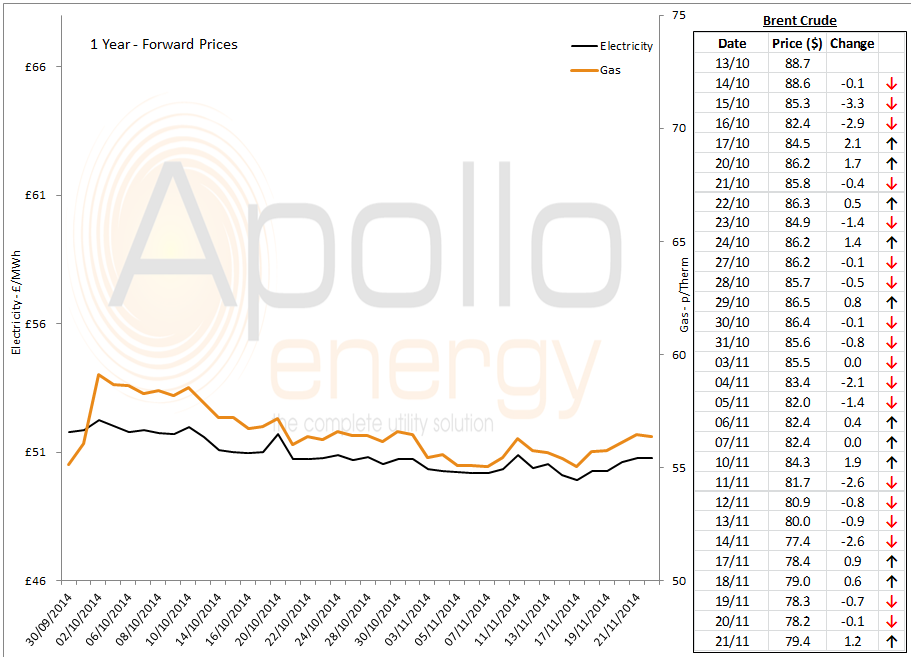 Brent 1st-nearby prices increased by the end of yesterday's session to settle just below $80/b, Brent's highest price for over a week. Strong economic data from the US helped to support prices while a meeting next week is expected to result in OPEC output cuts.