Spot power prices decreased yesterday as European solar and hydro production has shown a significant improvement. A further decrease is expected today as stronger wind levels are forecast for tomorrow and temperatures are set to remain mild. Gas prices registered gains on Wednesday due to a short UK gas system on the back of reduced BBL flows. Unscheduled maintenance at Norway's biggest gas field (Troll) has resulted in reduced Langeled flows this morning and the UK gas system is short once again; upward movement is expected. Today's prices can also be found in an easy to read table on our 'current UK energy price' page.

The UK gas system was short throughout yesterday's session which helped the majority of gas contracts increase in value. A reduction in BBL flows was the main reason for this drop in supply but news of further LNG deliveries before December helped to limit the gains. Power prices ignored their gas counterparts and displayed numerous losses across the near-curve on Wednesday. Further along the curve some contracts were slightly supported by firmer carbon emission allowances.

The UK gas system opened 25mcm short this morning as overall gas flows displayed a drop of 17mcm compared to yesterday. The main contributor to this short supply picture is an almost 50% drop in imports via the BBL pipeline due to reduced production in Norway. As a consequence the majority of gas prices inched higher with Day-Ahead adding £1.20/MWh to its price. Power contracts followed the gas curve closely this morning except for Day-Ahead which opened at a £3.15/MWh discount as a surge in wind generation is expected tomorrow. A number of power plants are also set to return online in the next few days but a similar number will experience a drop in output over the weekend.

Market close data has revealed that the 1-year forward price for both commercial gas &   while commercial electricity climbed higher - closing at 56.48ppt and £50.78/MWh, respectively. This can be seen in the graph below. 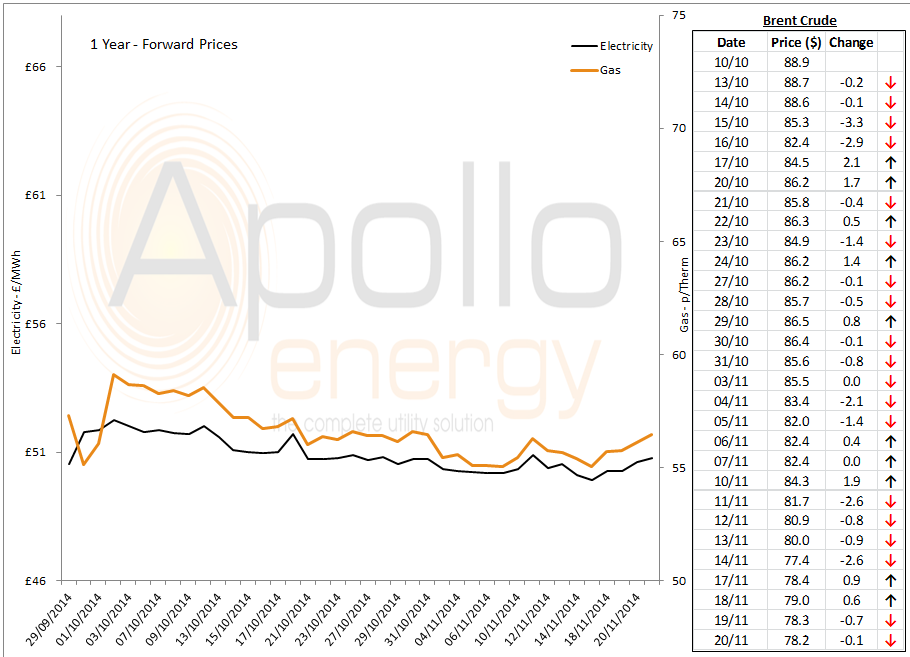 Brent 1st-nearby prices were relatively unchanged yesterday as the gains which were recorded in morning were wiped out by the afternoon's EIA report; Brent currently trades just above $78/b.