Spot prices dropped yesterday with the forecast of higher wind output in Germany helping the discounts. The Far-Curve saw 2014 baseload prices stabilise somewhat as a result of steady clean coal costs although these costs are expected to weaken.

Day-Ahead gas made a further gain and opened up at around 69ppt with the strengthening British Pound and recent Bacton BBL Pipeline deliveries influencing prices. Lower demand for British gas however led to the NBP prompt to fall throughout the session. The Vesterled pipeline is to undergo maintenance which will reduce flows by around 10mcm a day at the end of May and the start of June. The Power curve also saw numerous gains due to reduced nuclear availability as maintenance is on-going at a number of plants. Front-Month saw a rise of £0.15/MWh to close the session at £50/MWh, while the Far-Curve saw a few contracts make a loss as a result of weaker Brent, carbon allowance and APi2 coal prices.

BBL and Interconnector flows were close to zero which led to Day-Ahead gas making significant gains and opened at 69ppt. An LNG delivery is expected to arrive early next week and South Hook is currently seeing flows of around 40mcm which has prevented any major change to Front-Month. The Far-Curve was slightly bearish with Front-Season prices making small losses to coincide with falling Brent which was at $103.5/bbl this morning. Prompt Power prices fell, ignoring its bullish gas counterpart partly down to increased wind generation and lower demand. Front-Quarter and seasonal contracts also shed from their price on the back of weaker Brent prices. A 490MW nuclear reactor in the UK is also due to be shut down but this could be postponed until December 2015.

Market close data has revealed that the 1-year forward price for commercial gas went up while commercial electricity saw a small drop - both closing at 68.18ppt and £52.01/MWh, respectively. This can be seen in the graph below. 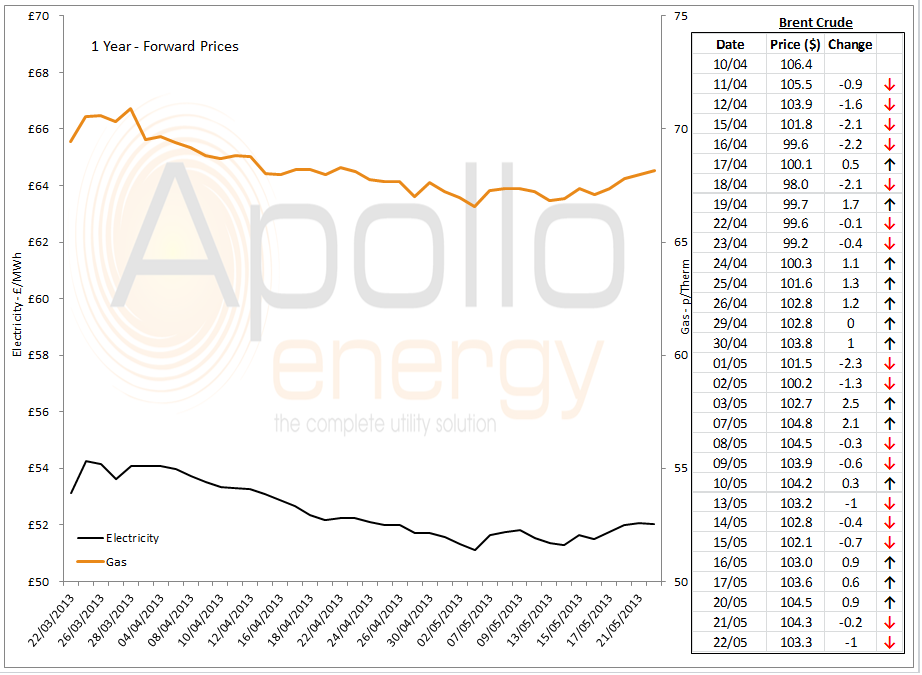 Brent 1st nearby prices made a loss despite improving equity markets and stronger gasoline prices which has also resulted in a lower oil complex. Brent currently stands at $103.3/bbl, a drop of around $1.00/bbl from yesterday morning.