Spot prices made a gain yesterday due to lower than expected renewable energy generation as well as scheduled maintenance at a few thermal power plants, higher demand following lower than seasonal temperatures also played a part.

Gas Prompt contracts saw a series of rises yesterday with Day-Ahead making a gain of 1ppt by the session's close. Both Front-Month and Front-Quarter climbed 0.55ppt as demand is higher than average for this time of year and it is expected to continue to be high over the next week. Bacton BBL experienced reduced flows and dropped from 15mcm to 8mcm which was also a contributor to the rise in contract prices. The rest of the curve was similarly bullish and every seasonal contract except Winter-15 went up by a minimum of 0.25ppt. August-13 was the only contract not to make a gain yesterday as power contracts followed a similar trend to gas; Day-Ahead made a rise of £0.50/MWh and Front-Month went up by £0.60/MWh. Front-Month Brent remains around the $105/bbl mark and EUA prices also show little change which helped power contracts add to their price.

Gas prices in the UK saw further gains this morning and Day-Ahead was at 66.5ppt, its highest opening price since the start of April following a forecast of colder temperatures this week. Langeled flows were down to 28mcm and BBL fell to 4mcm but despite this the system opened 10mcm long. St Fergus Mobil was the only facility to see Storage withdrawals while other sites were receiving injections of around 27mcm. The near-curve saw a series of losses with Day-Ahead dropping by £0.50/MWh with a healthy wind generation forecast of 3.7GW assisting the price drops. The Far-Curve made gains however and took direction from Brent and coal prices. The Aberthaw and Staythorpe power stations are expected to be taken offline tomorrow as coal generation continues to be limited and currently stands at 38%.

Market close data has revealed that the 1-year forward price for commercial gas & commercial electricity both rose slightly - closing at 67.98ppt and £52.05/MWh, respectively. This can be seen in the graph below. 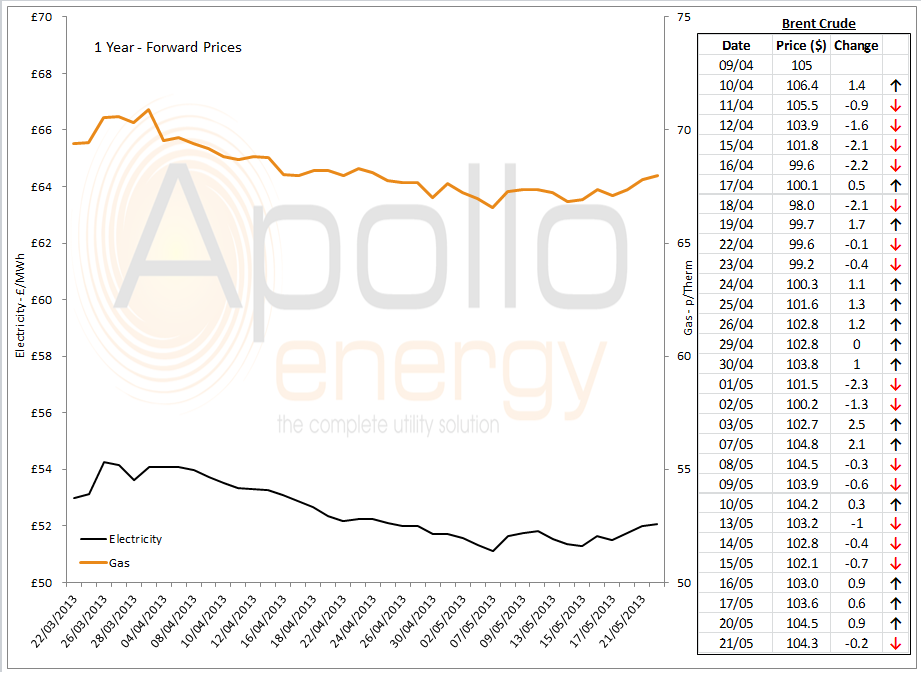 Brent 1st nearby prices rose to $105.31/bbl and has made up ground this month after falling to $96.75/bbl in April after plummeting since hitting a high of $119.07/bbl in February. Brent/WTI shed 0.53 $/b and gasoline prices also made a slight drop. The North Sea Shearwater oil field which feeds into the forties pipeline is back on stream this Saturday after suffering an outage on Thursday.