Spot prices moved slightly higher today as the continued warm weather has resulted in higher demand, with air conditioning thought to be the main consumer. Small and medium sized storage facilities were relied on to balance the UK gas system as supply levels were low. As a result gas prices did not register any losses but supply levels are expected to improve today as the Theddlethorpe facility became fully operational again. Today's prices can also be found in an easy to read table on our 'current UK energy price' page.

LNG and Norwegian flows were healthy on Friday which helped the system turn long. Day-Ahead fell by 0.15ppt to close at 65.1ppt while Front-Month contracts saw little change as storage injections helped prices hold firm. Seasonal contracts also saw minimal movement with oil remaining around the $108.5/bbl mark. Improved wind generation which increased from 15GW to 22GW helped Day-Ahead decrease by £0.15/MWh. Front-Month also registered a loss but was slightly restricted by lower than anticipated nuclear generation. Further along the curve seasonal contracts shed from their price on the back of lower APi2 coal prices with Winter-13 dropping to £54.70/MWh.

On the gas curve, Day-Ahead rose by 0.55ppt following a forecast of increased exports via the interconnector. Front-Month fell by 0.1ppt with significant LNG deliveries during July and an additional cargo expected on the 27th an influencing factor. On the far-curve, seasonal prices showed little movement with Winter-13 adding 0.1ppt to open at 72.4ppt. Most power contracts went up this morning as prompt contracts made gains on the back of a lower supply forecast. Front-Month climbed to £47.20/MWh while far-curve contracts saw similar movement to gas. Carbon allowances strengthened and APi2 coal prices also increased as positive economic data coming out of China helped prices.

Market close data has revealed that the 1-year forward price for commercial gas went up while commercial electricity saw no change from Friday - closing at 68.63ppt and £51.88/MWh, respectively. This can be seen in the graph below. 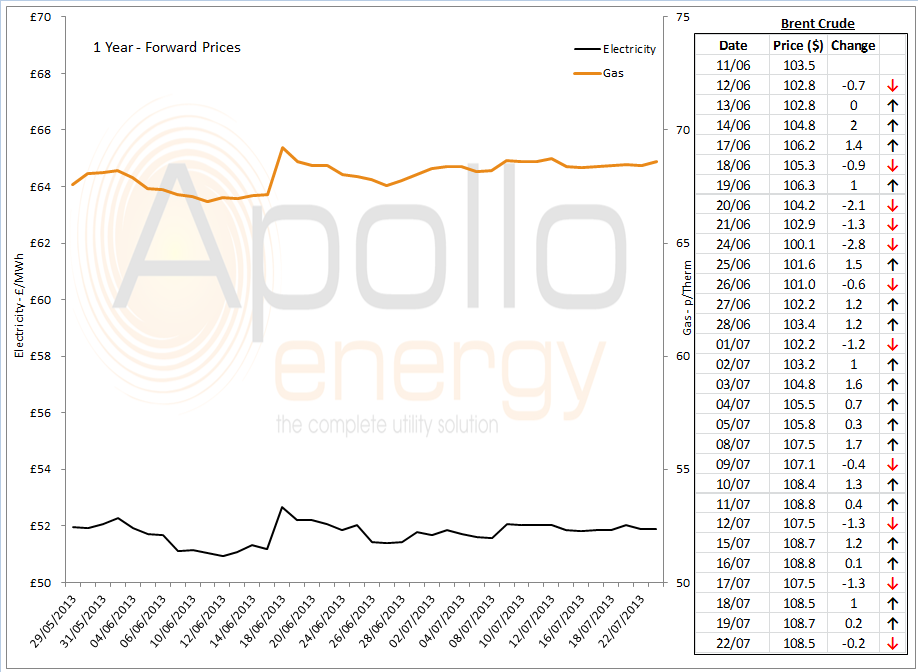 Brent fell during Friday's session and closed at 108.07 $/b which is a loss of 0.63 $/b and the Brent/ WTI spread fell to 0. Buzzard crude flows were affected by pipeline restrictions which supported timespreads while South Sudan experienced a drop in oil output over the weekend to 100 kb/d.