Spot power prices moved higher on Monday following a drop in conventional power output and reduced nuclear availability. Prices have opened lower this morning due to a well-supplied system and are expected to stabilise this afternoon. Gas prices also recorded gains yesterday on the back of lower supply, with most gas terminals suffering a reduction in output. Contracts were bearish at the start of today's session as supply levels have increased and demand levels remain low. Today's prices can also be found in an easy to read table on our 'current UK energy price' page.

Most gas contracts decreased in price this morning following eased tensions in Ukraine and the Middle-East; contracts fell by around 0.40ppt on average. Day-Ahead was the biggest mover and shed 0.45ppt from its prices as LNG send-outs increased by 7mcm, with overall gas flows up by around 10mcm. A slight drop in temperatures is expected at the start of next week which has had some effect on prices further along the curve. Wind production is forecast to double tomorrow but generation in general is rather low. Near-curve prices took direction from gas and opened bearish while stronger Brent and carbon provided some far-curve support.

Market close data has revealed that the 1-year forward price for both commercial gas & commercial electricity decreased - closing at 55.61ppt and £47.90/MWh,respectively. This can be seen in the graph below. 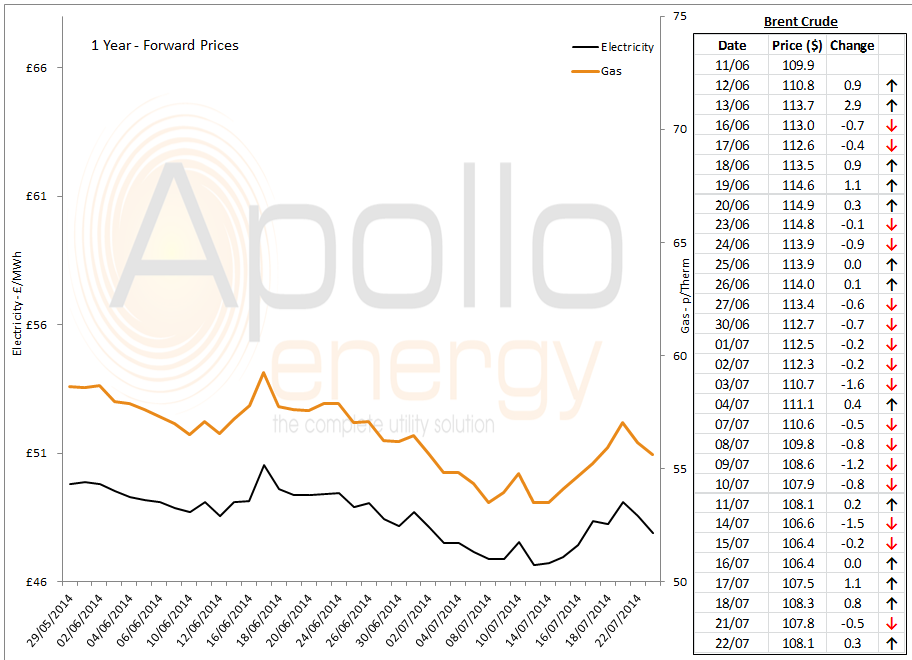 Brent 1st-nearby prices posted gains yesterday with bullish influence coming from tensions in the Middle-East and Ukraine; Brent traded at $107.8/b.