There has been a general correction across the power curve, though markets still remain nervous amongst fears that the MH17 disaster will prompt an escalation in conflict between the Ukraine and Russia. Prices were also eased down by higher wind forecasts and lower temperature forecasts on Friday, though a rise in economic activity and revised warmer weather forecasts may place some bullish pressure on the curve this week. Gas markets were relatively unpredictable on Friday as uncertainty over how the Ukrainian situation would develop controlled the curve. Markets traded down by the end of the session due to healthy BBL flows into the UK from the Netherlands and the expectation of supplementary LNG cargos. With an increase in international pressure, NBP contracts saw additional losses this morning as the risk of immediate conflict has eased slightly. Today's prices can also be found in an easy to read table on our 'current UK energy price' page.

The gas curve remained unsettled on Friday as markets deliberated over the MH17 tragedy, though contracts were down from the highs of Thursday's session, so closed the day at a discount. Selling resumed on Friday, after heightened risk saw short positions being covered, which helped to weigh down the curve. Day-Ahead shed 0.25ppt as demand was low and supply remained unaffected. The power curve also closed at a discount from market opening, with the bullish pressure created by the MH17 disaster and further sanctions easing slightly as the day progressed. Even though wind generation was forecast to increase today, Day-Ahead contracts fell on Friday.

The system opened 7mcm long this morning, facilitating a further drop in prices following the gains made on Thursday and Friday. W-14 saw the most significant drop, shedding 1.00ppt, whilst Front-Month and Day-Ahead fell by 0.80ppt and 0.50ppt, respectively. Despite more vessels set to arrive in the UK this week, LNG flows have been declining since Wednesday of last week and gas flows were slightly reduced this morning. The power curve also opened at a discount, with Day-Ahead contracts being the only exception gaining over £1.00/MWh as wind generation is expected to drop to its weekly low tomorrow. The largest losses were seen on the near-curve, with Oct-14 registering a loss of £0.85/MWh. Several nuclear units returned online over the weekend causing gas-fired generation to drop to 41% of the generation mix.

Market close data has revealed that the 1-year forward price for both commercial gas and electricity has decreased - closing at 56.16ppt and £48.55/MWh,respectively. This can be seen in the graph below. 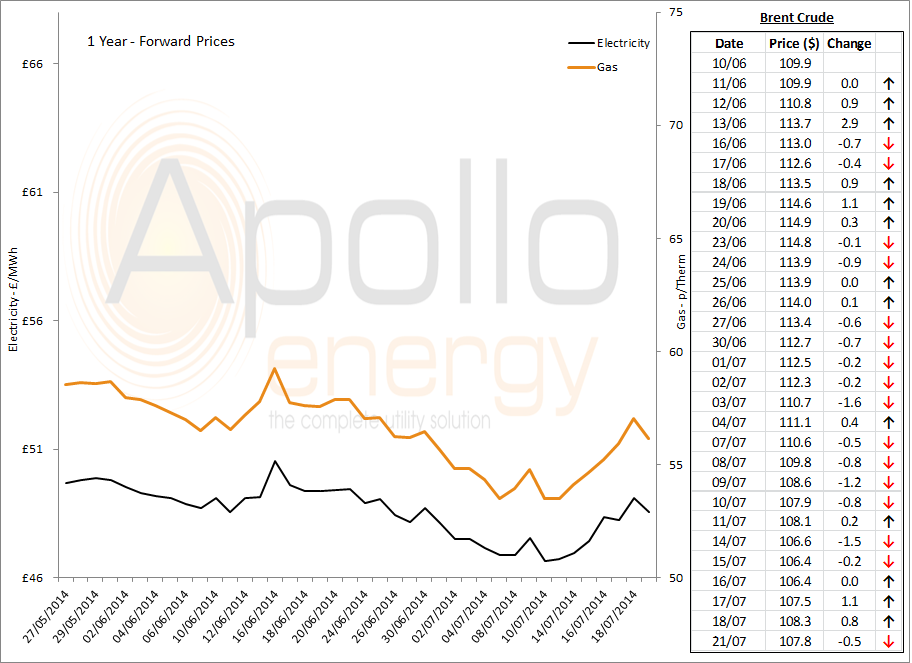 Brent-1st nearby prices opened at around $107.3/b this morning, with WTI trading at about $103/b. Whilst the Iraqi situation appears to have marginally stabilised this week, concerns over situations in Libya, Iran and the Ukraine, as well as threats of another war in Gaza, mean that geopolitical concerns are still elevated.