Spot power prices decreased yesterday but have shown signs of rising this morning with cooler temperatures expected next week. Wind generation is expected to improve but solar power will decrease, meaning the UK could rely on extra gas-fired generation to cope with demand. Gas prices recorded losses yesterday as healthy LNG supply and low demand dictated the market. Next week's colder weather has helped to push near-curve prices higher this morning, while stronger oil has supported the far-curve; prices are expected to stabilise this afternoon. Today's prices can also be found in an easy to read table on our 'current UK energy price' page.

The majority of gas contracts posted a loss yesterday as the UK gas system remained well-supplied and LNG prices were reduced further. Norwegian flows also increased, adding to an already healthy supply picture. Elsewhere, the Euro rallied higher against the Pound, limiting some downward movement. The power curve tracked the movement of gas and moved down on Thursday with improved generation levels on the continent supporting the bears further. Like gas, a strengthening Euro also helped to restrict the losses.

Gas prices have increased this morning with yesterday's outage at the Teesside facility reducing overall supply. A drop in temperatures next week also signals a rise in demand and this has helped near-curve contracts add to their price. Next week's drop in temperatures have pushed power prices higher this morning with stronger gas assisting further; a sharp rise in Brent has also helped to support the far-curve.

Market close data has revealed that the 1-year forward price for both commercial gas & commercial electricity increased - closing at 46.95ppt and £44.68/MWh, respectively. This can be seen in the graph below. 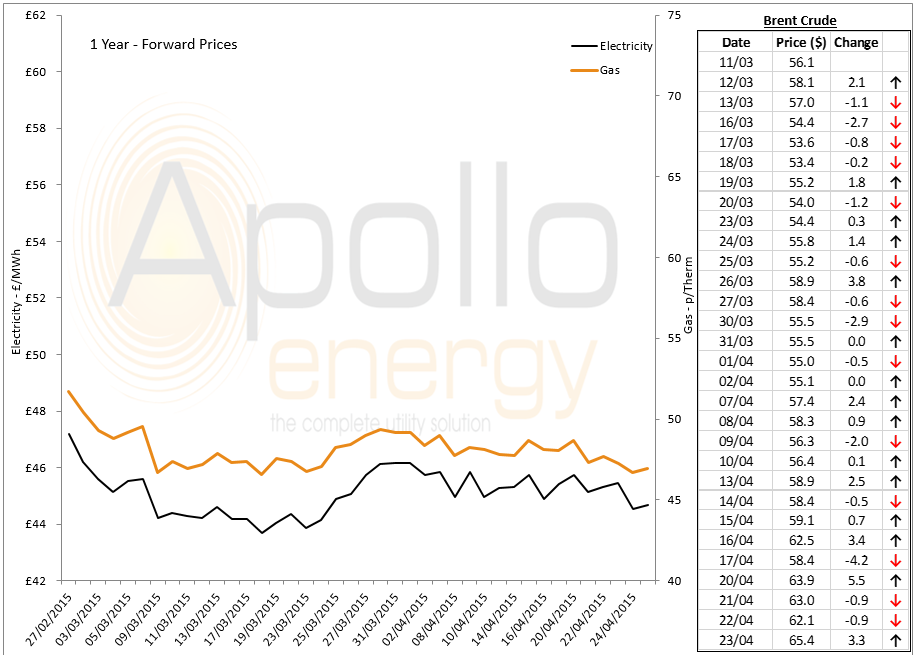 Brent 1st-nearby prices increased yesterday and have added over $3/b this morning to trade above $65/b. On-going tensions in Yemen remain a bullish factor with weak US oil production another.