Spot power prices have increased this morning as peak wind generation has fallen from 16GW on Friday to 12GW today, while nuclear and thermal availability is also reduced. This weaker supply picture should lead to further increases in the short term but a correction is expected to take place later in the week. An expected in drop in temperatures this week pushed gas prices higher on Friday with further assistance coming from stronger oil prices. Demand levels are forecast to be 11% over the seasonal average today on the back of cooler weather and this has helped prices record further gains this morning. Today's prices can also be found in an easy to read table on our 'current UK energy price' page.

Near-curve gas contracts ended Friday's session at a premium as a result of the colder weather forecast for this week. Further out, strengthening fuel prices offered support to some contracts with Brent rising by over $3/b. Power contracts largely mirrored the movement of gas on Friday and posted gains, following a bearish Thursday session. Cooler weather in the UK was the main driver of both the gas and power markets with heating demand expected to increase.

Temperatures are expected to be 2 °C below the season norm on average this week although Norwegian gas flows are also expected to ramp up to help meet this surge in demand. Gains have been recorded across the curve following this drop in temperature but a healthy LNG picture has helped to restrict some upward movement. Price increases are visible across the power curve this morning with an expected uptick in demand and stronger gas the main market drivers. Meanwhile, a drop in overall generation in Europe has also offered support, with lower wind production helping the Day-Ahead contract add to its price.

Market close data has revealed that the 1-year forward price for both commercial gas & commercial electricity increased - closing at 47.40ppt and £45.20/MWh, respectively. This can be seen in the graph below. 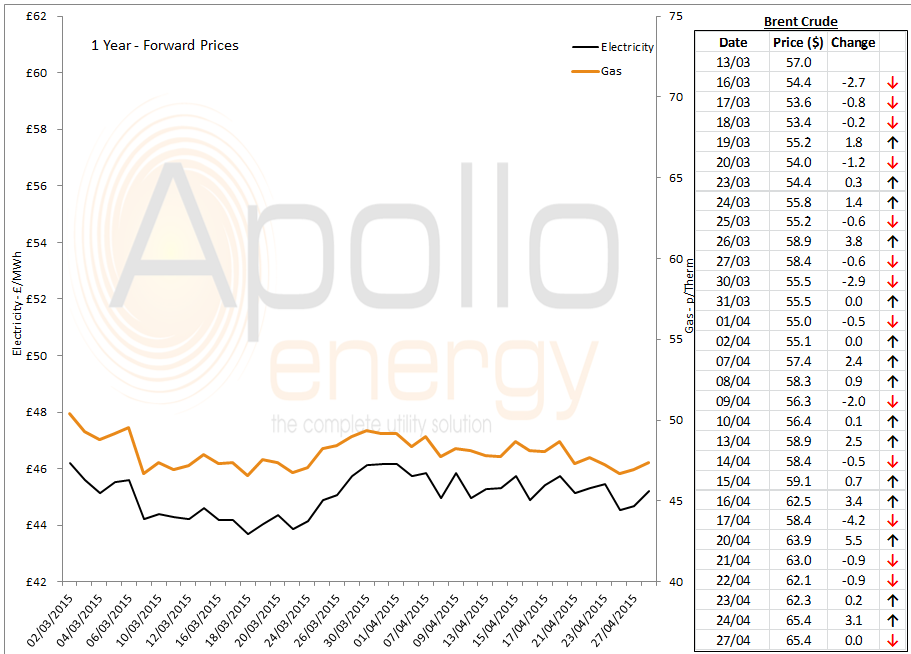 Brent 1st-nearby prices remain above $65/b this morning, nearing their highest level in 4  ½ months. The on-going tensions in Yemen remain a supportive factor, while weaker oil production in the US has also contributed to the upward movement.