Spot prices saw another rise as a result of lower than average temperatures as well as reduced solar and wind generation. Further along the curve, Calendar year 2014 baseload prices were relatively firm due to the stability shown by clean coal costs

NBP contracts saw drops of around 0.3ppt on average with Day-Ahead closing at 69.25ppt due to reduced demand. Front-Month Brent closed at $101.40/bbl which led to the WTI-Brent spread increasing to over $12/bbl and also resulted in the bearish outlook of the gas curve. Maintenance led to Langeled flows of around 7mcm and an unexpected outage at the KÃ¥rstÃ¸ plant had little effect on prompt prices. Numerous power contracts made losses yesterday with the forecast of improved temperatures helping the Day-Ahead close at a £1.40/MWh down. However the front three months continued to make gains with June-13 closing at £50.30/MWh and August-13 closing at £49/MWh.

Day-Ahead was the only contract to shed from its price today as the rest of the curve followed Brent's example. The Langeled pipeline saw an increase of 22mcm and the BBL pipeline saw additional flows of 16mcm which helped the system to open 14mcm long. The power curve saw little change with Day-Ahead opening at £52.50/MWh and June-13 showing no change whatsoever. Extra demand in the past few days due to colder temperatures and lower wind availability were the main factors in helping some power contracts keep their price. A few contracts on the far curve managed to make losses despite a number of nuclear units set to be taken offline in early June.

Market close data has revealed that the 1-year forward price for both commercial gas & commercial electricity made losses - both closing at 67.96ppt and £52.03/MWh, respectively. This can be seen in the graph below. 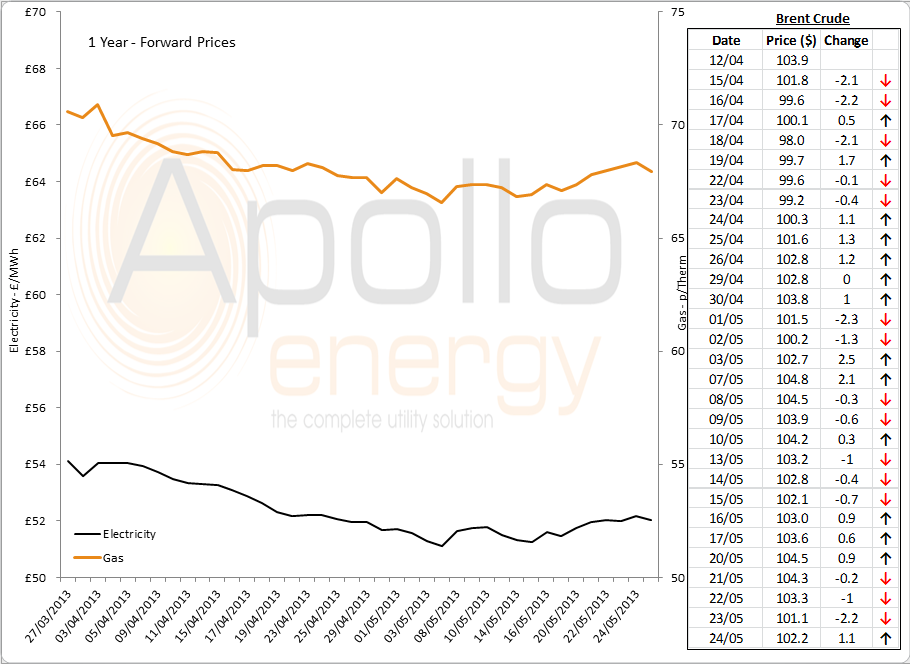 Brent 1st nearby prices fell to 101.11 in the morning but bounced back to 102.44 at the session's close. Weak Chinese HSCB PMI was countered by an improvement in Eurozone PMIs and positive US economic data.