Temperatures are expected to improve by the end of the week and higher wind generation has been forecast which has led to discounted spot prices. Healthy gas storage levels and an increase in flows should see spot prices continue to fall.

The Gas-Curve saw a series of losses on Friday with Day-Ahead closing at 68.5ppt and Front-Month shed 0.60ppt, while Winter-13 saw the biggest drop of 0.75ppt. Numerous terminals experienced an increase in flows and storage sites were well stocked which helped to lower contract prices. NBP storage levels were close to 30% and temperatures are forecast to return to seasonal averages at the turn of the month which has helped the bears take control of the curve. Losses were also seen on the Power-Curve and prompt contracts displayed price drops by as much as 0.60/MWh. The losses were less prominent on the Far-Curve and the biggest loss was seen by Winter-14 which fell by £0.25/MWh, whereas Summer-15 made a gain of £0.05/MWh. The discounts seen on the Gas-Curve were the main influence on power prices despite several nuclear plants going offline.

The Gas-Curve remained bearish with Day-Ahead dropping by 2.25ppt due to an increase in flows from the Bacton BBL and Langeled pipeline. The interconnector is set for annual maintenance but it is thought prices will not be as badly affected as last year, as flows have recently stood at zero. The Far-Curve saw Winter-13 add 0.10ppt to its price as a result of stable Brent prices. Day-Ahead power fell by over £3/MWh with a forecast of increased wind generation the main factor for the bearish sentiment this morning. Front-Month July opened the session at £49/MWh and the far curve saw a few contracts make slight gains on the back of increasing APi2 coal prices and the rising wider fuels complex.

Market close data has revealed that the 1-year forward price for both commercial gas & commercial electricity made losses - both closing at 67.59ppt and £51.95/MWh, respectively. This can be seen in the graph below. 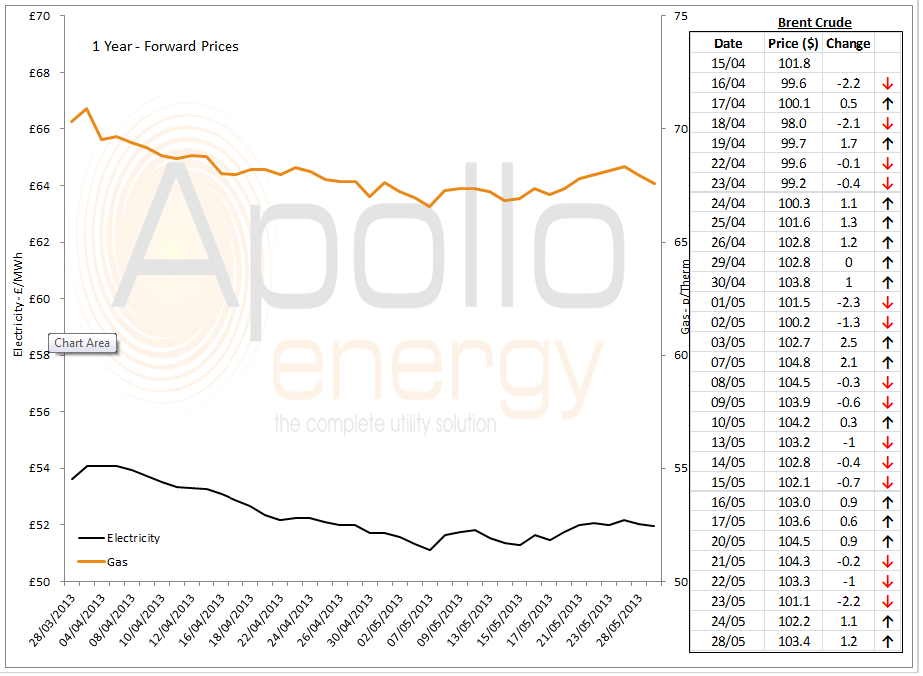 Brent 1st nearby prices saw little change yesterday with limited market movement, however this morning has seen prices take a slightly bullish direction. There was positive economic data coming out of the US but the EUR and USD are expected to go down which could also see Brent prices fall.