Spot prices are expected to increase today following an improvement in temperatures and reduced wind generation. The warm temperatures are also expected to continue through the weekend which should see prices hold firm in the coming days. The UK gas system was short yesterday as BBL flows dropped to zero once again and Langeled flows were also lower; falling from 31mcm to 23mcm. Demand was higher due to a number of storage injections and consumption is expected to reach similar levels today. Although this morning saw the system open long thanks to an improvement in Langeled and BBL flows. Today's prices can also be found in an easy to read table on our 'current UK energy price' page.

Numerous gains were seen on the gas curve yesterday with Day-Ahead climbing by 0.35ppt to close just below 66ppt. Storage injections were around 25mcm and stock levels have increased to around 66%. August-13 added 0.35ppt to its price as maintenance has been planned at Easington on the 10th August which will last until the 19th. Gas generation increased its share of the fuel mix to 32% which led to the gas and power curves showing similarities. Day-Ahead power followed its gas counterpart in making a gain and added £0.90/MWh, while seasonal contracts made small losses.

On the gas curve, Day-Ahead, August-13 and September-13 all made a loss and the system opened the session at 7mcm long. Weaker Brent influenced the Front-Month contract which shed from its price and expected LNG deliveries helped August-13 decrease in price. There was little change to the Far-Curve with most contracts showing no change and the biggest gain registered was 0.20ppt. Day-Ahead power fell by £0.35/MWh and opened the session at £50.65/MWh with an outage at the gas-fired Pembroke facility a driver of prices. The rest of the curve displayed only minor changes with numerous contracts showing no change at all; Winter-15 the only contract to make a loss, losing £0.10/MWh.

Market close data has revealed that the 1-year forward price for commercial gas went down while commercial electricity climbed higher- closing at 68.33ppt and £51.93/MWh, respectively. This can be seen in the graph below. 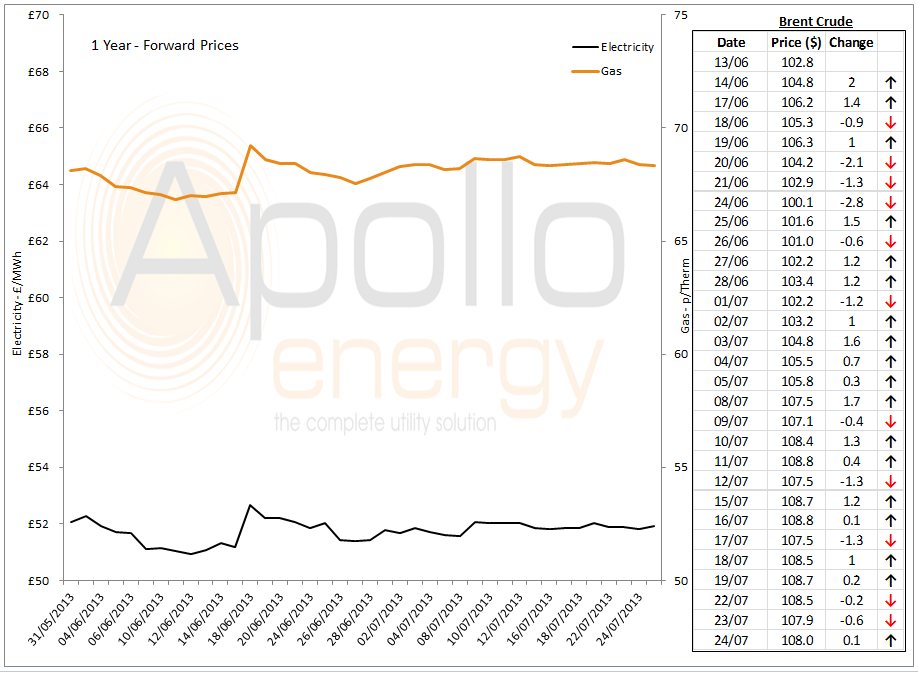 Brent prices saw little change today as traders wait on the release of weekly US inventories data and Chinese PMI data. The Kirkuk-Ceyhan pipeline is transporting once again after a brief shutdown yesterday and the North Sea's Forties pipeline is slightly restricted at present ahead of maintenance at the Kinneil terminal.