Temperatures are expected to be slightly warmer in the next few days while thermal supplies and wind generation are  quite low at present. Spot prices should see an increase on the back of this although nuclear availability should increase slightly. The UK gas system opened short this morning but consumption levels are expected to be lower in the coming days, so although prices have opened higher, we should see prices fall throughout the session. Today's prices can also be found in an easy to read table on our 'current UK energy price' page.

Day-Ahead gas showed little change throughout yesterday's session and closed at 65.75ppt as the long system, improved Bacton interconnector flows and expected LNG deliveries, saw only bearish movement along the curve. Further along the curve, weaker Brent prices led to Winter-13 and Summer-14 decreasing by 0.20ppt. Increased demand due to extra reliance on air conditioning as of late meant more expensive gas-fired generation was required as a number of coal-fired plants are undergoing maintenance. Front-Month went up by £0.40/MWh due to the increase in demand and the stronger Day-Ahead market; Front-Season fell by £0.15/MWh.

Gas prices opened without much change this morning with Day-Ahead and Front-Month both adding 0.25ppt as gas-fired generation is being relied on due to a number of coal plants undergoing maintenance. Front-Quarter fell by 0.05ppt as the Bacton interconnector has seen improved flows and LNG send-outs are currently stable. On the power curve, Day-Ahead fell by £1.60/MWh with the usual decrease in demand on Friday the biggest influence. Front-Month added £0.50/MWh to its price as the strengthening UK economy has led to companies spending more which has in turn increased demand. The Far-Curve saw little change and the wider fuels complex was bearish which meant contracts displayed no real direction.

Market close data has revealed that the 1-year forward price for commercial gas & commercial electricity made slight losses - closing at 68.27ppt and £51.83/MWh, respectively. This can be seen in the graph below. 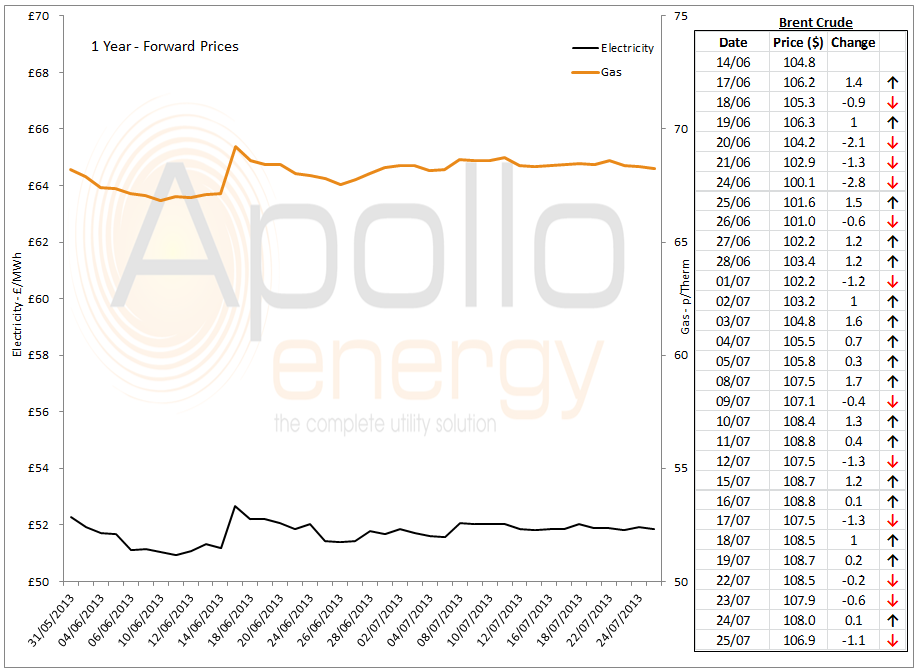 Brent prices made losses yesterday as a result of weak Chinese economic data and the Brent/ WTI spread fell to -1.8 $/b. Prices ignored the EIA report's bullish sentiment which showed that   gasoline rose by 0.3 Mb/d and distillate went up by 0.5 Mb/d.