Spot power prices moved higher on Friday as nuclear availability and renewable generation declined. However, prices have decreased this morning as wind generation has improved and demand levels are comfortable. Following a four-day period of downward movement, gas prices displayed a rebound on Friday as supply levels were slightly reduced due to a rise in exports. Prices have moved down this morning as Langeled flows have climbed to 60mcm and LNG supply remains strong. Today's prices can also be found in an easy to read table on our 'current UK energy price' page.

Gas prices increased on Friday, ending a 4-day bearish period as exports to Belgium climbed to 49mcm, their highest level for 3-months. Further along the curve, contracts were offered support by a weaker British Pound, although falling Brent provided some resistance. Power prices displayed a rebound and followed the movement of gas and stronger carbon emission contracts, with further support coming from a strengthening Euro. Overall generation levels were also lower than previous days which helped the prompt shed from its price.

Gas prices have displayed significant downward movement this morning with another large drop in oil prices weighing on contracts. Norwegian supply has surged higher as additional flows have been re-directed to the Langeled pipeline and strong LNG supply has helped towards a comfortable gas system. Friday's gains were erased this morning as power prices tracked the movement of their gas counterparts. An improved supply/ demand outlook helped the Day-Ahead contract decrease, while weaker Brent resulted in losses on the far-curve.

Market close data has revealed that the 1-year forward price for both commercial gas & commercial electricity decreased - closing at 41.43ppt and £42.03/MWh, respectively. This can be seen in the graph below. 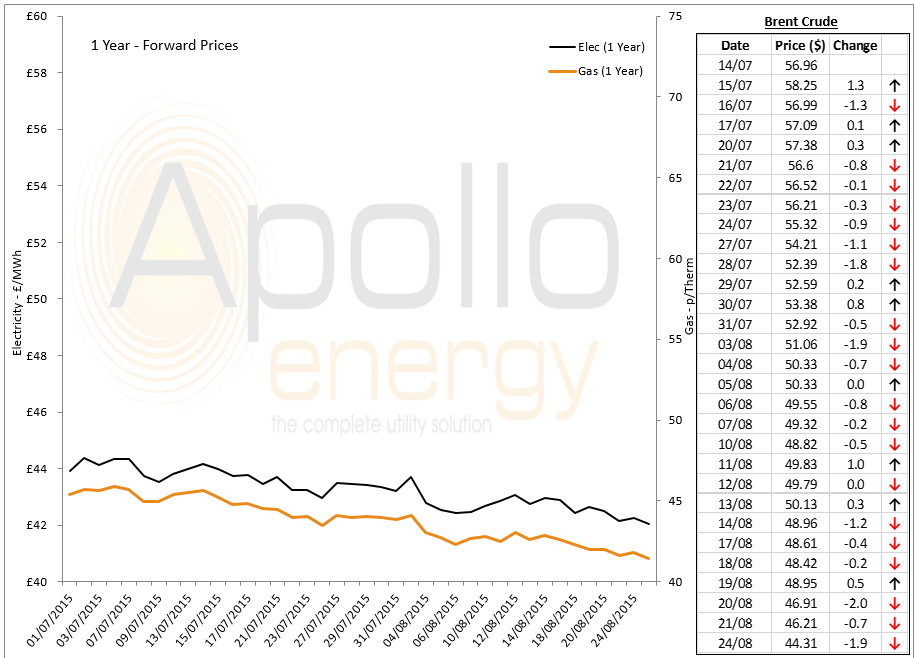 Brent 1st-nearby prices continue to plummet, hitting a new six and a half year low to trade just above $44/b; global oversupply and weak economic data in China continue to weigh on the market.