Spot power prices decreased yesterday with influence mainly coming from weaker gas, however, today's outlook is bullish amidst cooler temperatures across Europe and weaker nuclear availability in France. Gas prices displayed losses yesterday following a significant rise in Norwegian flows via the Langeled pipeline. Additional flows were re-directed to the UK due to restrictions at the Emden entry point at the Dutch/ German border. Prices have rebounded this morning as exports to Belgium have increased by 17% and Norwegian supply is lower than yesterday. Today's prices can also be found in an easy to read table on our 'current UK energy price' page.

Gas prices cancelled out Friday's gains as strong supply levels resulted in a comfortable UK gas system; assisted by falling oil prices. Norwegian imports climbed to 62mcm due to maintenance at an entry point in Germany, which resulted in flows being re-routed to the Langeled pipeline. Power contracts also moved down and were influenced by weaker gas and oil, with Front-Month shedding £0.15/MWh from its price. A stronger renewable generation forecast helped to weigh on the prompt, with wind levels expected to remain strong throughout the week and solar generation climbing from 1.7GW yesterday, to 2.1GW today. The return of two nuclear power plants over the weekend also supported the bears.

Gas prices have moved higher this morning despite another sizeable drop in oil prices, as the UK gas system became less comfortable due to a significant rise in exports to Belgium and a drop in Norwegian flows. Power prices recorded gains and were influenced by a rise in gas and coal contracts despite a healthy renewable generation outlook. Falling Brent helped to limit some of the gains on the far-curve and Winter-17 was one of the few contracts to weaken.

Market close data has revealed that the 1-year forward price for both commercial gas & commercial electricity increased - closing at 41.48ppt and £42.15/MWh, respectively. This can be seen in the graph below. 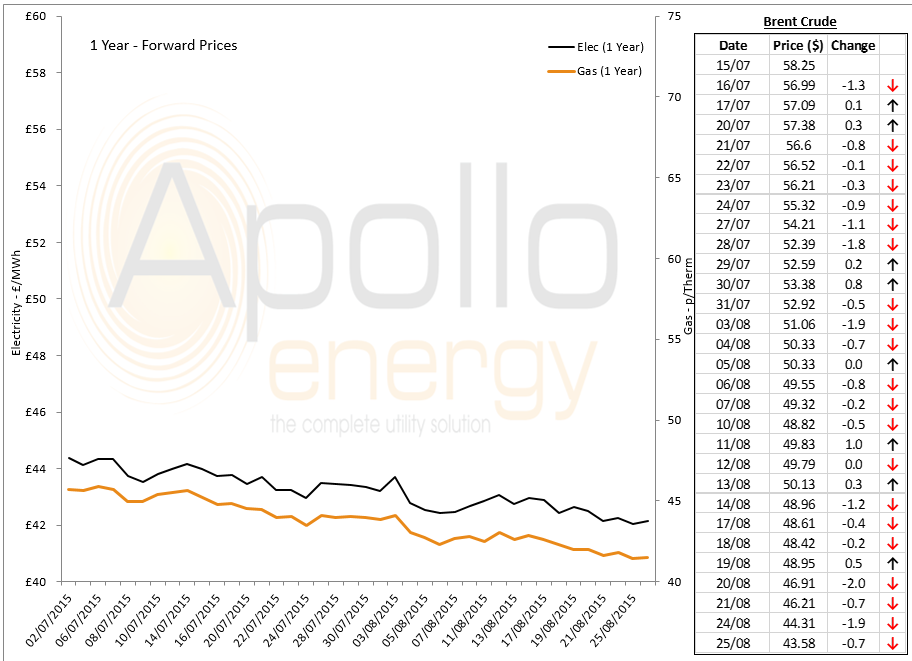 Brent 1st-nearby prices continue to show a significant decline following the 'collapse' of the Asian stock market, with the World's second largest oil consumer, China expected to be severely affected.