Wind production levels are on the rise but were still relatively low yesterday, while nuclear availability was also weaker which helped to push power prices higher in the morning. Prices have opened at a discount today and further losses are anticipated on the back of a stronger supply picture. Eased tensions in Ukraine and a mild weather forecast for winter helped to weigh on gas prices yesterday. Little change to fundamentals is expected today but the current colder weather is providing some bullish support. However, downward movement is expected this afternoon as supply levels are healthy and the situation in Ukraine is relatively calm. Today's prices can also be found in an easy to read table on our 'current UK energy price' page.

Colder weather has provided some bullish tension but supply levels in the UK are healthy with a further LNG delivery expected this week. Concerns regarding Russian gas transit through Ukraine eased and the majority of contracts moved down by the session's close. Wind generation levels are steadily improving with production expected to double today, providing bearish sentiment across the near-curve. Power fundamentals were largely unchanged and weakening coal, carbon and oil helped to weigh on the far-curve.

Gas prices continued their bearish trend this morning with Day-Ahead recording a 1.35ppt loss since Monday's opening. A mild winter is expected which is helping to push near-curve contracts down and concerns regarding Russian supply have eased. The far-curve also displayed losses which ranged between 0.45ppt for Winter-14 and 0.15ppt for Winter-15. The power curve tracked gas and opened at a discount with Day-Ahead opening at £42.35/MWh on the back of strengthening wind generation. Some near-curve contracts failed to display much movement as November-14 opened unchanged and Front-Month lost just £0.05/MWh.

Market close data has revealed that the 1-year forward price for both commercial gas & commercial electricity made a significant loss - closing at 55.93ppt and £49.45/MWh, respectively. This can be seen in the graph below. 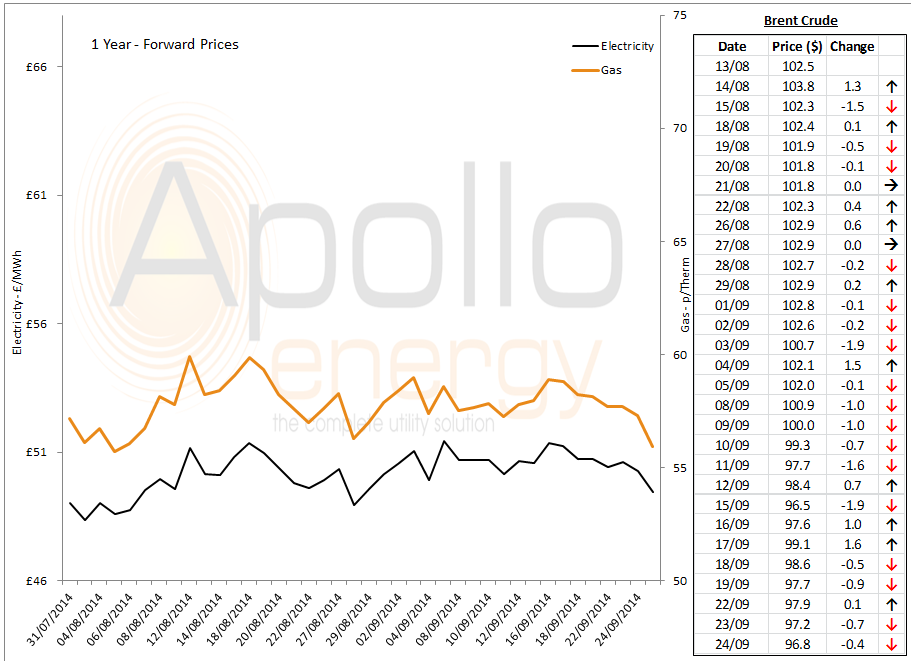 Brent 1st-nearby prices recorded another loss yesterday on the back of strong supply from Nigeria and the Middle East, combined with weak economic data. Brent trades at around $96.7/b this morning, while WTI stands at $97/b and further bearish movement is expected.