Spot power prices are showing signs of rising in preparation for the winter period and displayed gains yesterday as demand levels are increasing. Despite opening lower, prices are expected to rise this afternoon on the back of higher consumption and weak renewables, today's UN Summit which is to focus on climate change prevention is also a factor. Gas prices were pushed higher yesterday due to a drop in Norwegian supply following the start of scheduled maintenance. Prices have opened at a discount this morning as concerns regarding Russian supply via Ukraine eased overnight. However Russian deliveries into Europe are still 20% below their usual levels and prices could turn bullish if there is no positive news today. Today's prices can also be found in an easy to read table on our 'current UK energy price' page.

Gas contracts began yesterday's session with a series of losses but weaker supply pushed prices higher throughout the day. Norwegian flows were limited due to maintenance, while BBL flows also remained low. Day-Ahead power ended yesterday's session lower on the back of an improved wind generation forecast, with production expected to rise over the next few days. Fundamentals were largely unchanged from Friday's levels and movement on the curve was generally minimal.

Gas prices were relatively unchanged this morning with numerous contracts showing no movement whatsoever. Day-Ahead climbed 0.20ppt higher due to a short UK gas system as Bacton BBL flows fell to 9mcm. An LNG delivery is expected to arrive in the UK today and storage levels remain at 97%. Despite these healthy storage levels, colder weather has increased demand and restricted any downward movement on the near-curve. Power contracts followed their gas counterparts closely this morning and most displayed small gains. In contrast, Day-Ahead fell by £1.55/MWh as wind generation levels are forecast to double tomorrow. Carbon contracts have opened slightly lower this morning and coal prices are unchanged, offering no support to seasonal contracts.

Market close data has revealed that the 1-year forward price for both commercial gas & commercial electricity decreased- closing at 57.40ppt and £50.28/MWh, respectively. This can be seen in the graph below. 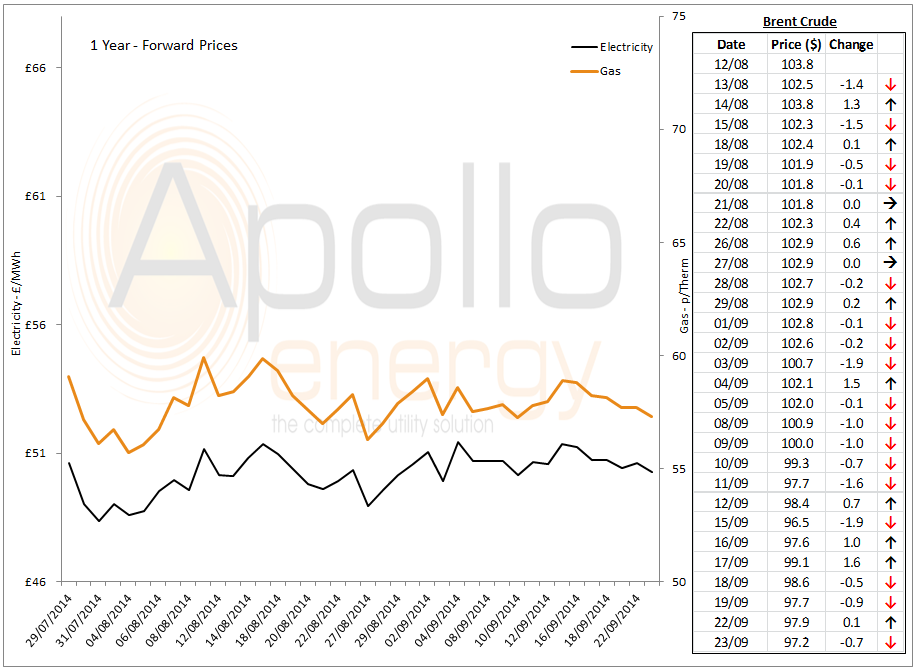 Brent 1st-nearby prices moved down yesterday morning but climbed slightly higher in the afternoon to end the session just above $97/b.