Spot prices rose yesterday following a drop in wind production which should remain low for the next few days. It is unlikely we will see much change in prices until next week as there are no obvious factors that could drive prices in either direction. Gas prices continue to register losses thanks to warmer weather in Europe which has resulted in lower demand. October-13 prices are expected to decrease once again but potential Norwegian supply concerns could provide support to the bulls. Today's prices can also be found in an easy to read table on our 'current UK energy price' page.

Near-Curve gas prices decreased yesterday as improved Langeled flows of 22mcm resulted in a long system later in the afternoon. Meanwhile the Norwegian Karsto processing plant is expected to return on Saturday which will inject another 55mcm into the system. Further along the curve contracts were bearish and registered losses which averaged around 0.20ppt. Power contracts went up yesterday unlike their gas counterparts which led to a wider spark spread. Day-Ahead added £0.15/MWh to its price due to the lower wind generation forecast of around 1.6GW. Numerous nuclear reactors are also expected to go offline this week including a unit in Hartlepool which isn't expected to return until early October.

The gas curve made further losses and was helped by the currently well-supplied system which opened at 30mcm long as Holford withdrawals increased to 19mcm. South Hook send outs rose to 14mcm while 2 LNG deliveries are anticipated later this week. Seasonal contracts increased and took influence from stronger Brent. Day-Ahead power lost £51.40/MWh overnight and took direction from ample supply levels which were higher than average for this time of year. Front-Month opened at a £0.10/MWh discount while the coal contract fell to $82.25/tn after reaching a high of $85/tn yesterday.

Market close data has revealed that the 1-year forward price for both commercial gas & commercial electricity made a loss - closing at 66.17ppt and £51.38/MWh, respectively. This can be seen in the graph below. 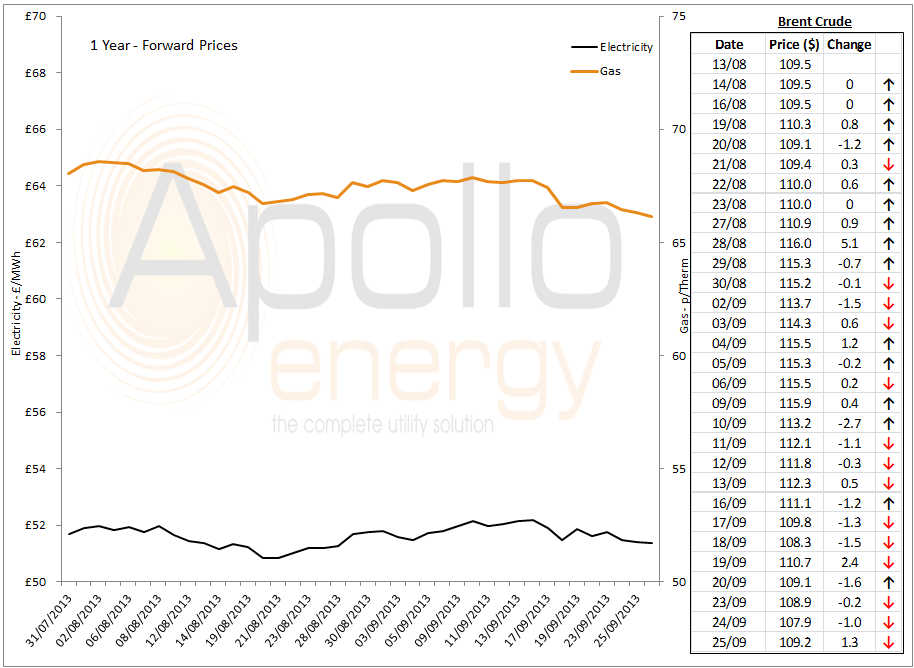 Brent 1st-nearby prices fluctuated yesterday due to mixed reports coming out of the US regarding the current situation with Iran and their nuclear program. Brent held firm at around $108/b for most of the day but climbed to $108.8/b by the end of the session.