Spot prices went higher yesterday as supply is limited despite little change in consumption levels; low wind availability is thought to be the main factor for this. In terms of gas, the UK system was well balanced which led to bearish movement in NBP spot prices yesterday. The return of the Rough facility should lead to a stable outlook for October-2013 prices today. Today's prices can also be found in an easy to read table on our 'current UK energy price' page.

Day-Ahead gas fell by 0.60ppt despite a temporary reduction in Langeled flows during the day. Far-curve prices went up slightly on the back of bullish Brent and the British Pound strengthening against the Euro. Winter-13 is soon to expire and closed the session at 69.3ppt while lower demand levels are expected as above average temperatures have been forecast for the next week or so. On the power curve Day-Ahead added £2/MWh to its price to end the session at £54/MWh, this was a consequence of maintenance at a nuclear plant and reduced wind production. Front-Month also added £0.35/MWh and was influenced by the current maintenance schedule for a number of nuclear facilities. Movement on the far curve was subdued and the majority of contracts closed displaying little change.

The gas curve succumbed to the bears this morning as Day-Ahead opened at a 0.25ppt discount following an improvement in Langeled flows which currently stand at 30mcm, flows via the St Fergus pipeline have also ramped up. Front-Season contracts took influence from prompt prices while contracts further along the curve added to their price thanks to a stronger British Pound. Meanwhile an LNG delivery is expected to arrive at South Hook at the end of the month. Day-Ahead power registered a loss this morning as wind production rose and offset the drop in nuclear availability. In contrast, Front-Month went up by £0.45/MWh and opened at £50/MWh due to growing concerns regarding supply. Further along the curve, power prices were supported by stable carbon allowances and bullish prompt and APi2 coal prices.

Market close data has revealed that the 1-year forward price for both commercial gas & commercial electricity went up - closing at 66.35ppt and £51.50/MWh, respectively. This can be seen in the graph below. 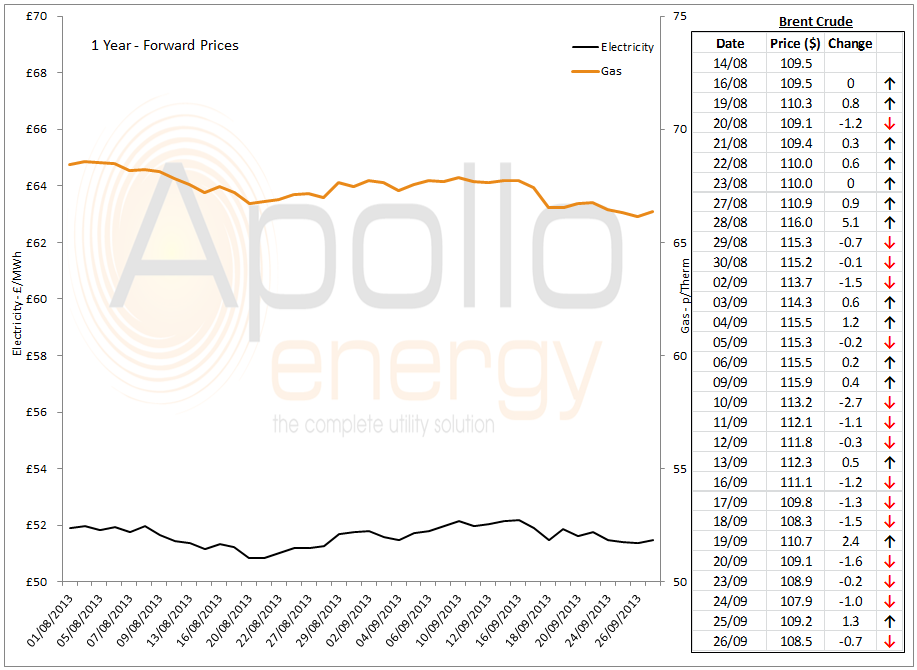 Brent 1st-nearby prices reached a peak of 110$/b yesterday but managed to register a loss $0.32/b at the end of the session and is currently trading at $108.2/b this morning. A bearish EIA report and positive news released by the UN in regards to Iran and Syria helped drive prices down.