There was a plunge in equity markets and in particular banking, while the EUR/USD conversion fell to a new 4-month low at 1.2830. Due to the colder weather and interconnector outages there has been an increased call on thermal assets and gas prices remained firm which helped support spot prices in France yesterday. Spot prices were higher in Germany as the wind output weakened but will go up in the next few days as the cold weather will ease whereas the French spot system will ease and prices will decrease.

WD saw a trading high of 103ppt and Day-Ahead climbed over 8ppt despite the system opening 9mcm long and continuing to remain long for the majority of the session. Storage levels and the forecast cold weather dictated the prices as the rest of the curve also rose. Power Day-Ahead climbed £2.15/MWh due to colder temperatures predicted for next week and S13 reached a high of £51.90/MWh as the contract delivery reaches ever closer. Gas fired capacity rose to around 36% as power followed a similar track.

Day-Ahead remained above the 100ppt mark and the rest of the curve saw slight gains as April opened up 1.40ppt. This morning LNG flows were at 16mcm as the UK received 2 shipments with more due to arrive later in the week. There was an increase in storage withdrawals and Rough was flowing at approximately 30mcm. Brent remains firm and opened up at $0.53/bbl as further measures are set to be taken in regards to the Cypriot bailout. April13 saw a record high of £57.35/MWh this morning and the curve saw bullish movement with the prompt hit worst of all. Gas-fired increased its share in the generation mix to 30% whereas wind generation dropped 25GWh and makes up 8%.

Market close data has revealed that 1-year forward prices for commercial gas and commercial electricity both saw a rise- closing at 70.55ppt and £54.25 respectively. This rise can be seen in the graph below. 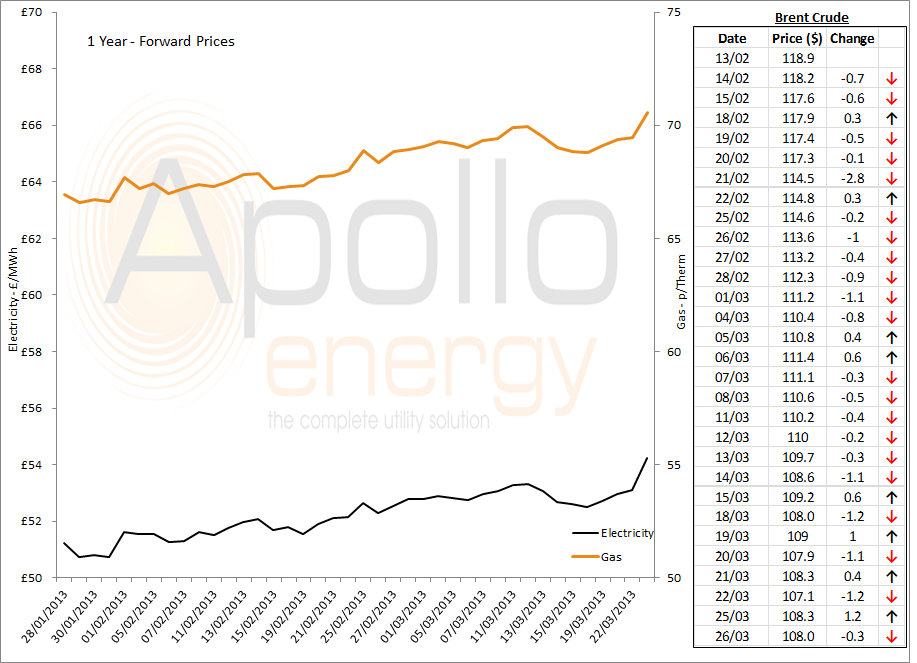 Brent Crude prices were at $106.8/bbl early this morning and hit $109.07/bbl on a relief rally after the Cyprus bailout deal. There was an indication from the Kuwait oil minister that the market is slightly oversupplied while the Saudi oil minister stated 100$/b was a reasonable oil price. Brent/WTI May13 is currently at -13.36$/b. Today's focus is the uncertainty surrounding Cyprus, Italy and the Eurozone in general.