Spot prices remain tight as consumption is nearly at a record high for this period of the year due to the cold weather and the production of renewable energy in Germany is set to weaken over the weekend. Banks will re-open in Cyprus tomorrow but as Iceland showed it could take years until normality is resumed while over in France unemployment reached a record high in February. The EUR/USD conversion remained below 1.29.

The Gas Day-Ahead session closed 4.75ppt down day-on-day as LNG sendout went up to 26mcm and there was an improvement in system issues. A loss in power in Norway at the Ormen Lange field caused the Within-Day contract to spike to over 104ppt in the afternoon; despite this flows in the Langeled pipeline were over 70mcm at times. Day-Ahead for power posted intra-day gains whereas the rest of the curve was influenced by the bearish nature of the gas contracts. Nuclear generation fell because of an outage at the Torness2 nuclear unit which increased the reliance on gas. The power curve was unaffected despite higher carbon prices and EUA contracts fell to around 70mcm.

Demand for gas was high due to the cold weather which saw the system open to a bullish NBP curve and the ZP/NBP WD spread at around 1.75ppt didn't do anything to affect the flows via the Bacton Interconnector, which fell slightly. April-13 rose to 74.95ppt and has shown a rise of 7.6ppt since the beginning of the month. The morning's power curve saw May-13 dropped by £0.30/MWh while April-13 remained firmed up by £0.10/MWh. Lower peak demand for Thursday meant the Day-Ahead was reduced by over £2/MWh and CCGT made up over a third of the UK power generation mix today with wind generation expected to see a decrease by the end of the week.

Market close data has revealed that 1-year forward prices for commercial gas and commercial electricity both saw a rise- closing at 70.60ppt and £54.13 respectively. This rise can be seen in the graph below. 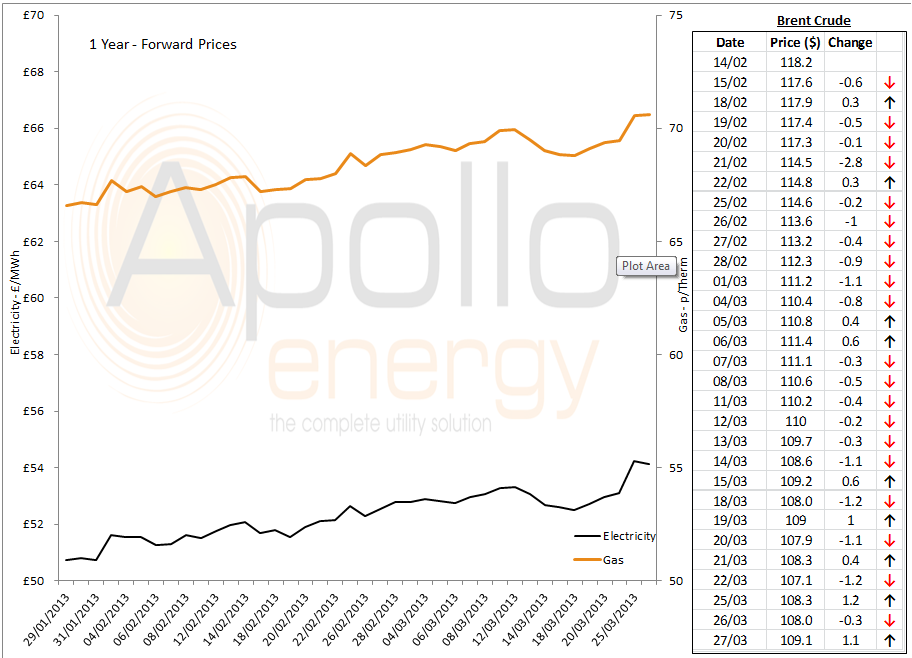 Positive economic data from the United States saw Brent prices hit $109.59/bbl although there are still worries about the Eurozone. Diesel and gasoline's retail price will be reduced to around 50$/t in China which will offset the increase at the end of February after a 4% drop of their crude price benchmark. Today's focus is regarding the EU Commission survey and potentially good news from Italy.