Spot power prices have shown little change this morning as warmer temperatures have been offset be weaker wind and thermal generation. Above average temperatures are expected throughout July and this could result in downward movement at the start of next week, providing generation levels improve. Gas prices moved down yesterday as the UK gas system remained long despite the restart of the Belgian interconnector as LNG and Norwegian supply was healthy. A comfortable supply/ demand outlook has resulted in small losses on the gas curve this morning. However, trilateral talks between Ukraine, Russian and the EU could provide support next week. Today's prices can also be found in an easy to read table on our 'current UK energy price' page.

The gas curve displayed numerous losses yesterday as the system was well-supplied throughout the session following a rise in Norwegian supply, as the outage at the Kollsnes gas facility was resolved. A healthy LNG outlook also helped to weigh on the market with further deliveries expected before the end of the month. The power curve followed the movement of gas although the downward movement was less visible due to low renewable generation. A warmer weather forecast helped some near-curve contracts to open at a discount, while weaker oil helped to weigh on the far-curve.

Supply levels in the UK remain healthy despite the restart of the Belgian interconnector which will lead to a rise in exports. Norwegian flows have returned to average levels and demand is around the seasonal norm, resulting in a long gas system and weaker prices. An upward revision in temperatures has helped some contracts on the power curve to open at a discount this morning. However, weak wind generation offset the drop in demand and Day-Ahead has shed £0.10/MWh from its price.

Market close data has revealed that the 1-year forward price for commercial gas recorded a small gain, while commercial electricity was unchanged - closing at 45.70ppt and £44.13/MWh, respectively. This can be seen in the graph below. 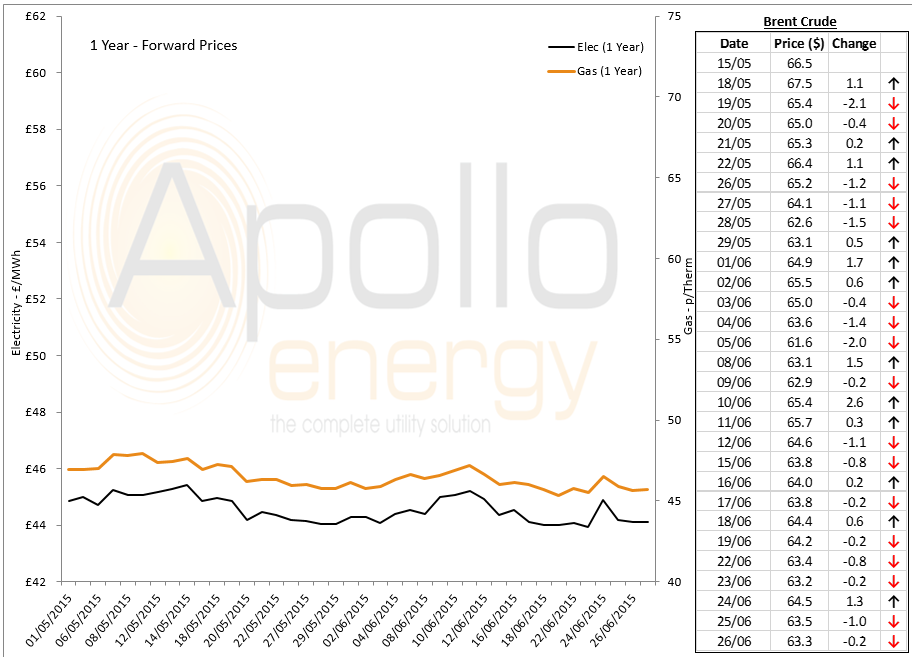 Brent 1st-nearby prices continued to move down and currently trade at $63.25/b with direction coming yesterday's EIA report.