Spot power prices moved slightly higher yesterday afternoon as renewable generation was weak and coal-fired generation was down due to an outage. However, temperatures are warm across Europe which has reduced demand and has resulted in a bearish outlook for today. Gas prices decreased yesterday despite an unplanned outage at the Kollsnes processing plant in Norway, as the market attempted to correct downwards following a surge in previous sessions. The UK gas system has opened long this morning leading to further losses, although low stocks could result in additional storage injections and prices are expected to stabilise. Today's prices can also be found in an easy to read table on our 'current UK energy price' page.

Near-curve gas prices climbed higher yesterday afternoon following news of the Belgian interconnector's re-opening this morning, which should put an end to the UK's current oversupply. An outage at the Norwegian Kollsnes facility also offered support to the near-curve which will restrict output to 40mcm for the next 1-2 days. Movement on the far-curve was largely bearish with influence coming from weaker oil prices. Power prices showed little movement on Wednesday as improved generation levels offered some downward pressure. The return of a 500MW unit at a coal-fired power plant in the UK helped to weigh on prices, with a second unit expected to return online today. However, the effects of increased generation capacity were offset by a stronger gas market.

Warmer weather has helped to lower demand this morning and has contributed towards a long UK gas system and numerous losses across the gas curve. This healthy supply picture could be short-lived though as exports to Belgium are set to resume and a rise in storage injections is expected. A rise in temperatures has also helped the bears seize control of the power curve this morning, combined with a healthier generation outlook. The end of maintenance at coal facilities and slightly stronger renewable generation are two factors which have led to a healthier supply picture.

Market close data has revealed that the 1-year forward price for both commercial gas & commercial electricity decreased - closing at 45.65ppt and £44.13/MWh, respectively. This can be seen in the graph below. 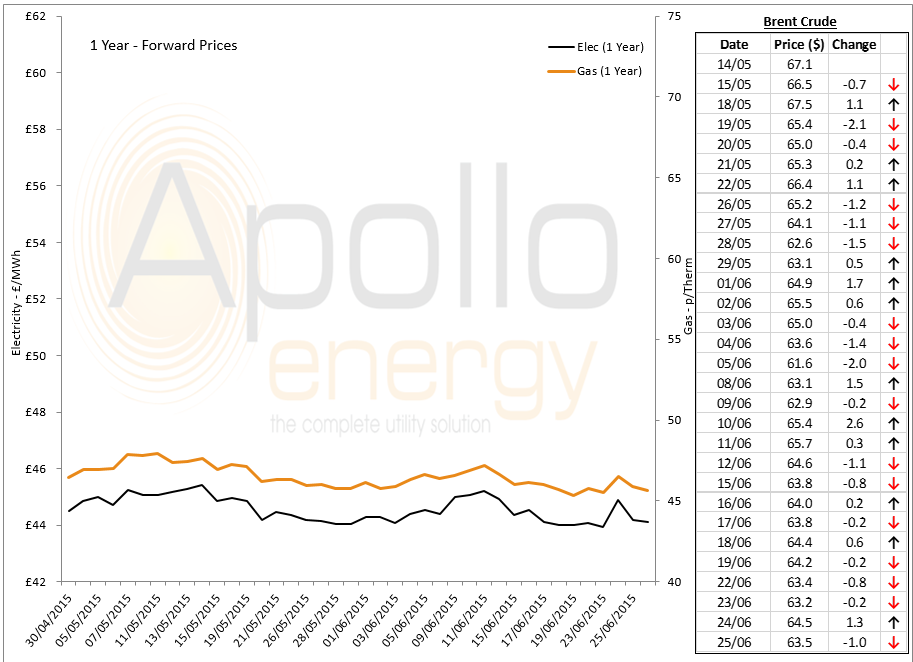 Brent 1st-nearby prices moved down overnight despite a drop in US crude stocks and currently trade just below $63.5/b.