Spot power prices moved higher yesterday on the back of colder temperatures which increased demand, although improved nuclear and wind generation limited the upward movement. Prices continue to climb higher today, taking into account the usual rise in demand on Mondays and a weaker wind generation forecast for next week. Gas prices increased yesterday due to a weaker supply picture with lower Langeled and BBL flows resulting in a short system. Today's market focus is on talks between Russia, Ukraine and the EU in regards to gas supply and prices will depend on the outcome of these talks. Today's prices can also be found in an easy to read table on our 'current UK energy price' page.

Day-Ahead gas closed at £42.50/MWh as prices continued their bullish trend with the winter period fast approaching and with gas flows reduced. Russian supply talks were on-going and movement was rather limited as traders wait on the results. Power prices tracked gas and also moved higher although wind generation was expected to double today which helped the prompt contract decrease. Supply levels were generally healthy following an uptick in nuclear availability but the main market driver was a stronger demand forecast.

Gas prices showed further increases this morning with Front-Month the biggest mover, adding 1.45ppt to its price. Day-Ahead opened 1ppt higher and trades at 50.50ppt as Linepack was 11mcm short due to a drop in LNG flows. Langeled flows also decreased as imports in the UK were reduced at the Norwegian pipeline. Further along the curve most contracts also climbed higher with Front-Season rallying 0.80ppt higher. Day-Ahead power recorded a gain of £4.00/MWh to rise above £46.00/MWh for the first time since March. Wind generation levels are expected to fall by 80% on Monday which was the main factor for this significant increase. Elsewhere, November-14 added £1.20/MWh to its price and was the biggest mover on the far-curve, taking influence from stronger gas and revised weather reports.

Market close data has revealed that the 1-year forward price for both commercial gas & commercial electricity climbed higher - closing at 57.30ppt and £50.53/MWh, respectively. This can be seen in the graph below. 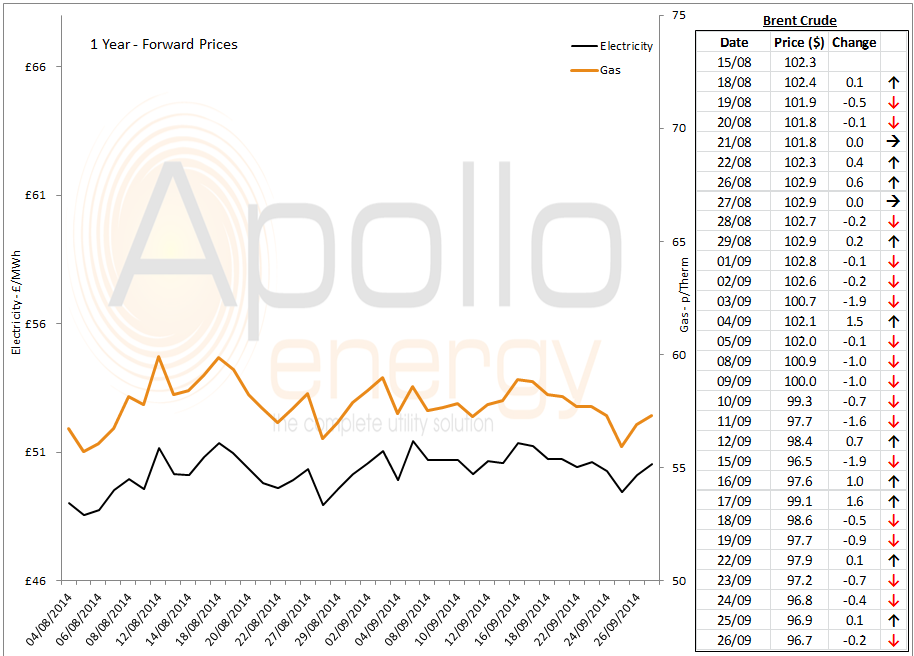 Brent 1st-nearby prices remain below $97/b and displayed little movement yesterday, while WTI prices also stabilised at $92.6/b. Improved Libyan output was offset by weak economic data and on-going tensions in the Middle-East.