Renewable generation is forecast to be rather low this week with wind production expected to be below 2GW; prices have moved higher as a result. However, the demand/ supply picture is much improved this morning and the outlook is stable to bearish. Gas prices decreased on Friday following reports of an agreement between Russia and the Ukraine in regards to supply into Europe. Further downward movement is expected today as overall gas flows have improved and officials at Gazprom and Naftogaz are confident a deal can be struck this week. Today's prices can also be found in an easy to read table on our 'current UK energy price' page.

Gas contracts fell by 1.40ppt on average by the end of Friday's session as talks regarding Russian supply were positive. The general supply picture with winter quickly approaching is thought to be very healthy, with a further LNG delivery expected in the UK this week. A weak renewable generation forecast was the main driver of prices on Friday with near-curve contracts closing at a premium. Further along the curve most contracts took direction from gas and displayed a decrease in the afternoon.

The gas curve posted further losses this morning with contracts shedding 0.50ppt on average. Talks are on-going in Berlin with a positive conclusion expected by Friday which has helped the bears seize control of the curve. The power curve showed little movement this morning with most contracts unchanged from Friday's closing price. Day-Ahead was the session's biggest mover and fell £3.65/MWh lower with wind generation expected to rise significantly tomorrow.

Market close data has revealed that the 1-year forward price for commercial gas decreased while commercial electricity climbed higher - closing at 55.13ppt and £51.78/MWh, respectively. This can be seen in the graph below. 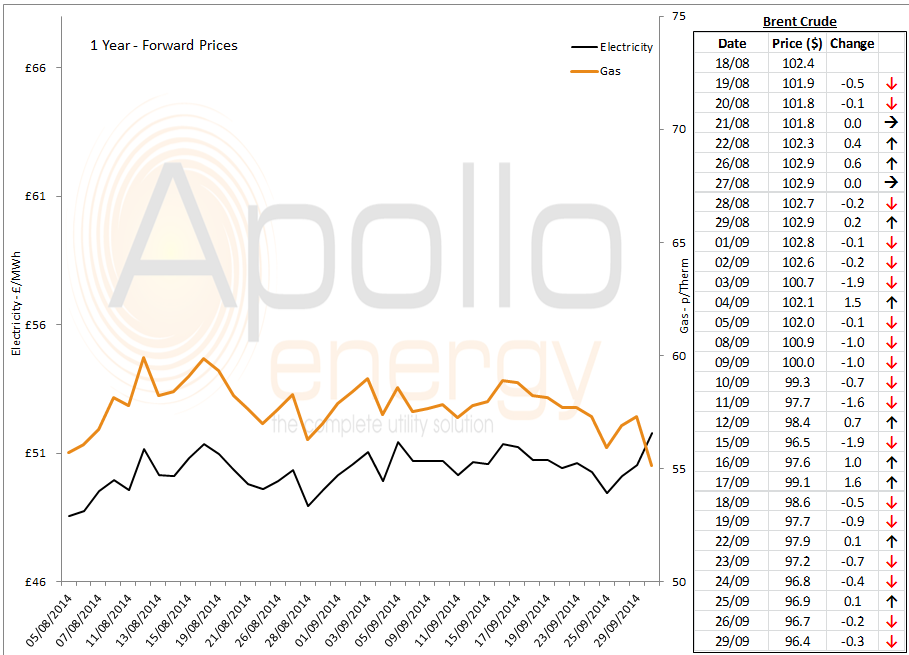 Brent 1st-nearby prices fell by $1.39/b over the course of last week, while WTI increased by $1.13/b following a strong rebound on Friday; the Brent/ WTI spread currently stands at $3.7/b.