Spot prices are expected to climb higher in the next few days as colder weather has been forecast until Thursday. Stronger carbon prices could also provide support to the bulls; however the gains should be limited due to ample supply levels. Gas prices increased on Friday due to a short UK gas system and rising demand, the decline in supply levels was a consequence of weaker storage withdrawals and reduced imports via the interconnector. Today UK LDZ demand has grown by 12mcm and now stands at around 236mcm. Meanwhile, storage withdrawals have improved significantly and BBL flows have also ramped up leading to an over-supplied system. Demand levels in the UK are forecast to be lower tomorrow which should help prices fall. Today's prices can also be found in an easy to read table on our 'current UK energy price' page.

On the gas curve, Day-Ahead and Front-Month both recorded gains on Friday although the rest of the curve displayed practically no change. The under-supplied system and colder weather supported prices while storage levels have dropped below 80%. The power curve was also rather flat on Friday with Day-Ahead registering a small loss due to a healthy wind generation forecast for Monday. Front-Month failed to take any direction, while movement on the far-curve was mixed, supported slightly by stronger gas and carbon prices.

Gas contracts recorded sizeable losses this morning with Day-Ahead falling by 1.60ppt and Front-Month opening at a 1.85ppt discount. UK temperatures have remained relatively mild compared to the rest of Europe and combined with healthy supply levels this added support to the bears. The UK gas system opened 23mcm long with output via the Rough facility at 46mcm. Power prices also displayed a downward trend and took influence from gas with Day-Ahead decreasing by £0.60/MWh. Further along the curve Front-Quarter fell by £0.40/MWh and Front-Season shed £0.90/MWh from its price. Higher wind generation levels have been forecast until Thursday which is the main driver of prices at present.

Market close data has revealed that the 1-year forward price for both commercial gas & commercial electricity decreased - closing at 65.39ppt and £51.18/MWh, respectively. This can be seen in the graph below. 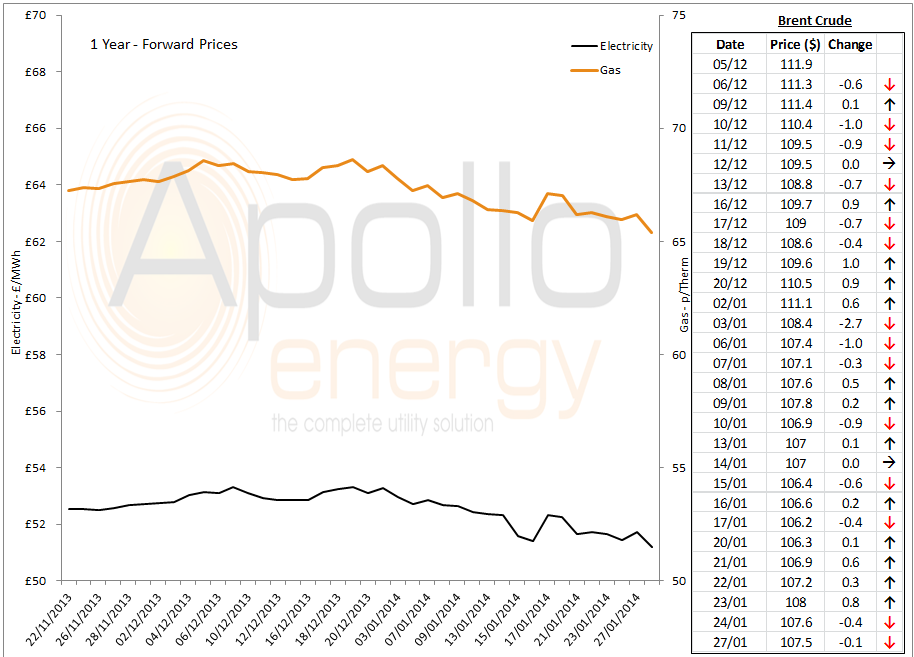 Brent 1st-nearby prices fell by $1.50/b on Friday, although the loss could have been much more significant if it wasn't for the on-going tensions in the Middle East. Brent currently trades at around $107.7/b this morning following a gain of $0.30/b at the start of the session; the Brent/ WTI spread now stands at -$11/b.