Spot power prices are expected to move higher over the next few days due to colder temperatures, leading to higher consumption; however the gains will be slightly limited by softer coal and carbon prices. Gas prices decreased yesterday after an improved weather forecast in the UK with above average temperatures expected for the start of February. Today UK LDZ demand has fallen by 2mcm and is currently 0.8% below the seasonal average. The UK gas system also opened long due to high storage withdrawals and ample supply; prices are expected to make further losses on the back of this. Today's prices can also be found in an easy to read table on our 'current UK energy price' page.

Gas prices registered further losses yesterday with Day-Ahead falling by 0.65ppt and February-14 closing at a 0.60ppt discount. The UK gas system was just 4mcm long as flows via the Rough facility fell to 15mcm; however contracts took influence from an improved weather forecast. Far-curve contracts displayed smaller losses with Summer-14 shedding 0.25ppt from its price and Winter-14 decreasing by 0.10ppt. Day-Ahead power failed to register any movement yesterday as weaker gas prices were countered by reduced wind production. The majority of contracts made losses and took influence from gas. A number of units at the Heysham nuclear plant went offline and the restart of unit 1 has been postponed by a further week.

The gas curve continued to take a bearish direction due to a revised weather/ demand forecast. A long UK gas system helped Day-Ahead open 0.55ppt lower while storage levels are still above average for this time of year. An LNG deliver is expected to arrive at the start of February which also offered downward pressure. On the power curve Day-Ahead started the session £1.70/MWh lower as wind generation levels are set to improve tomorrow. Gas prices continued to have an effect on power contracts with price-drops by as much as £0.95/MWh seen further along the curve.

Market close data has revealed that the 1-year forward price for both commercial gas & commercial electricity decreased - closing at 64.90ppt and £50.88/MWh, respectively. This can be seen in the graph below. 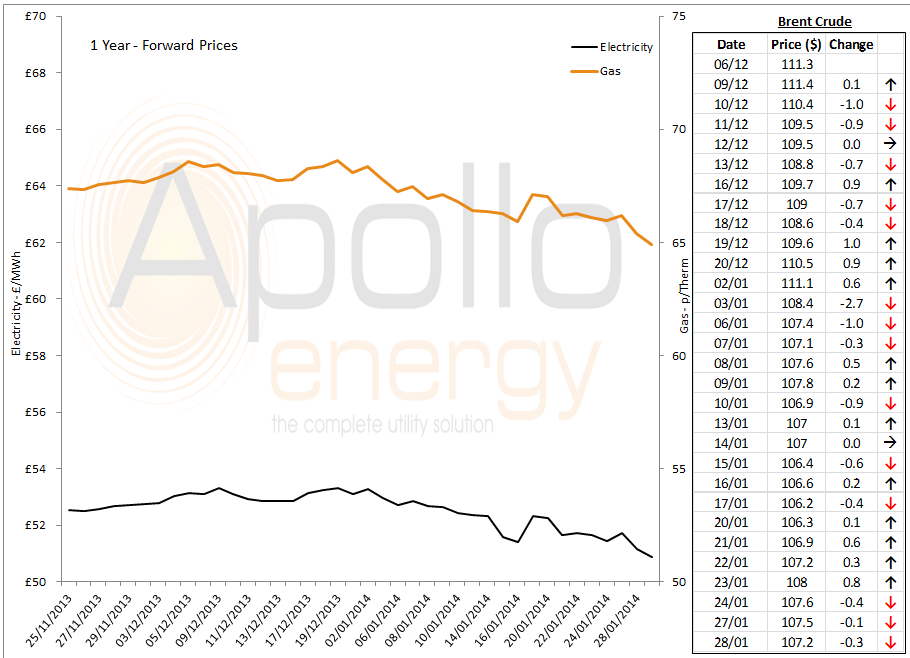 Brent 1st-nearby prices have fallen by $1.19/b following economic concerns in China, while WTI has recorded a $0.92/b loss; Brent is currently trading just below $107/b.