Spot power prices are rather volatile at present with slightly weaker supply levels pushing prices higher on the near-curve, while weaker gas is weighing on other contracts. Coal has also displayed a sharp rise and nuclear availability is quite low and continues to decrease. Gas prices moved higher yesterday due to on-going tensions in Ukraine which could affect Russian gas flows into Europe. The gas curve has corrected downwards this morning as a â‚¬15m payment has been made by the Ukraine to Russia and gas flows are expected to recommence. Today's prices can also be found in an easy to read table on our 'current UK energy price' page.

Gas prices initially opened higher yesterday due to the situation in Ukraine but a long UK gas system helped to restrict the gains somewhat. A colder weather forecast next week continued to push near-curve prices higher, while comfortable demand levels helped to weigh on the prompt contract. A revised weather forecast has predicted milder weather next week and this has helped some gas contracts to decrease. Tensions between Russia and Ukraine have also calmed following payments to allow gas transit between the two countries to continue.

Stronger fuel prices helped to push most power contracts higher yesterday and an expected drop in wind generation supported the prompt. Low nuclear availability was also a bullish factor but overall demand levels remain around the seasonal norm. The milder weather forecast has helped power contracts to shed from their price this morning. Further along the curve a reduction in carbon prices helped the bears take control of the far-curve and losses were observed by the majority of contracts.

Market close data has revealed that the 1-year forward price for both commercial gas & commercial electricity decreased - closing at 50.40ppt and £47.14/MWh, respectively. This can be seen in the graph below. 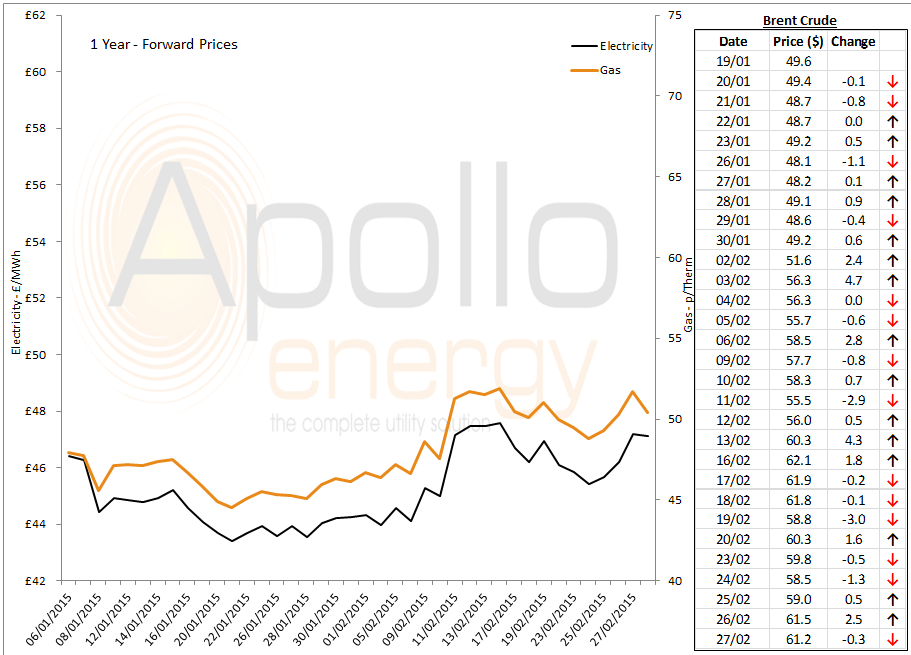 Brent 1st-nearby prices fell by almost $1.60/b yesterday and currently trade at $61.22/b, however, the overall outlook is a bullish one with positive forecasts regarding global oil demand coming from Saudi Arabia.