Spot power prices moved higher yesterday afternoon and took direction from a stronger demand forecast and weak wind generation. Nuclear generation also remains low but a number of power plants are expected back online in the coming days. Gas prices also moved higher yesterday despite a bearish start to the session, as fresh concerns regarding the Russian/ Ukrainian conflict and a drop in Norwegian output provided support. A potential drop in Russian gas transit continues to affect the market today but a weaker oil outlook could restrict upward movement this afternoon. Today's prices can also be found in an easy to read table on our 'current UK energy price' page.

A drop in overall supply helped gas contracts record gains yesterday, with numerous outages in Norway reducing gas flows into the UK. Meanwhile, three LNG deliveries are expected to arrive in the UK next month, limiting some upward movement. Power prices followed their gas counterparts and moved higher yesterday, while an expected drop in wind generation offered support to the prompt. However, temperatures remain around the seasonal average and this helped to restrict the gains somewhat.

The UK gas system opened 40mcm long this morning as overall gas flows were 30mcm higher and demand levels are comfortable. This has helped the majority of contracts erase some of yesterday's gains with improved Langeled flows one of the main factors for the healthier supply picture. Wind generation levels are forecast to double tomorrow which helped Day-Ahead power record a significant loss this morning. Temperatures remain mild and demand should remain around average levels for the coming weeks, while numerous nuclear power plants are set to return online in the coming days.

Market close data has revealed that the 1-year forward price for both commercial gas & commercial electricity increased - closing at 50.30ppt and £46.20/MWh, respectively. This can be seen in the graph below. 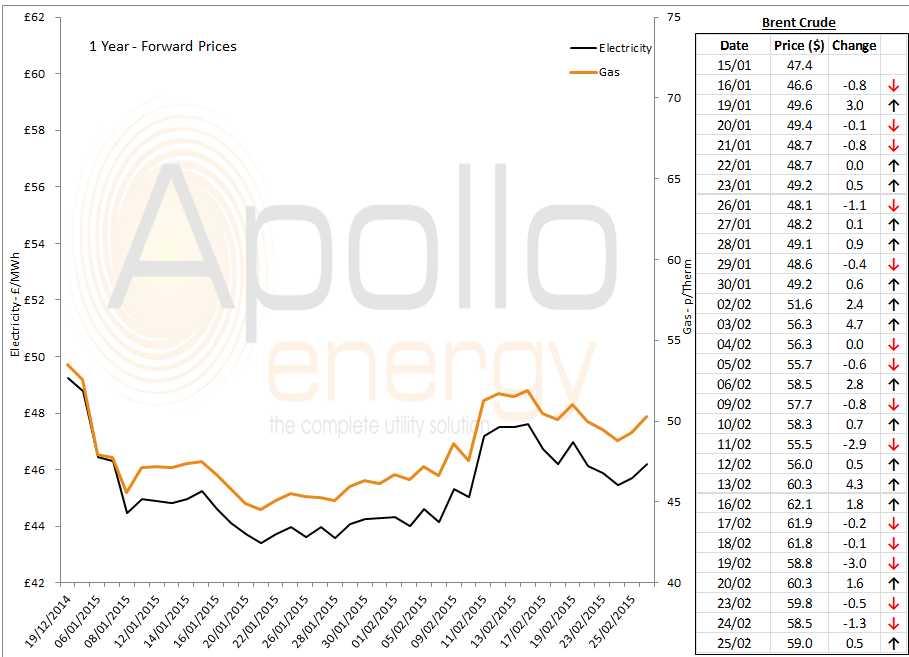 Brent 1st-nearby prices climbed higher yesterday and currently stand around $59/b, although the on-going situation regarding global oil supply could result in price-drops later today.