Spot prices made further gains yesterday due to a drop in wind generation and a number of outages at hydro plants. While gas flows via Norway have failed to improve this morning which should lead to higher September-13 prices, the oil market will also have an influence prices. Today's prices can also be found in an easy to read table on our 'current UK energy price' page.

Maintenance in Norway has concluded but this has not resulted in an increase in supplies; prompt contracts moved higher as a result of this. Day-ahead increased by 0.35ppt day-on-day while Winter-13 climbed 0.30ppt to close at 70.45ppt. Day-Ahead power closed £0.15/MWh higher than its opening price due to a decline in nuclear availability which led to a reliance on expensive gas-fired generation. Seasonal contracts took a similar direction to gas and became bullish, ignoring lower APi2 coal prices.

The Rough facility is expected to switch to single train injection mode and the demand for exports through the interconnector is low. This helped Day-Ahead register a 0.05ppt loss although Front-Month contracts remained bullish as the NBP received a smaller share of Norwegian flows compared to Europe. Day-Ahead decreased by £0.40/MWh and ignored the increase in gas-fired generation due to the drop in nuclear availability. The new Front-Month October-13 went up by £0.15/MWh and opened at £48.90/MWh, while seasonal contracts followed bullish gas and oil.

Market close data has revealed that the 1-year forward price for both commercial gas & commercial electricity went up - closing at 67.63ppt and £51.70/MWh, respectively. This can be seen in the graph below. 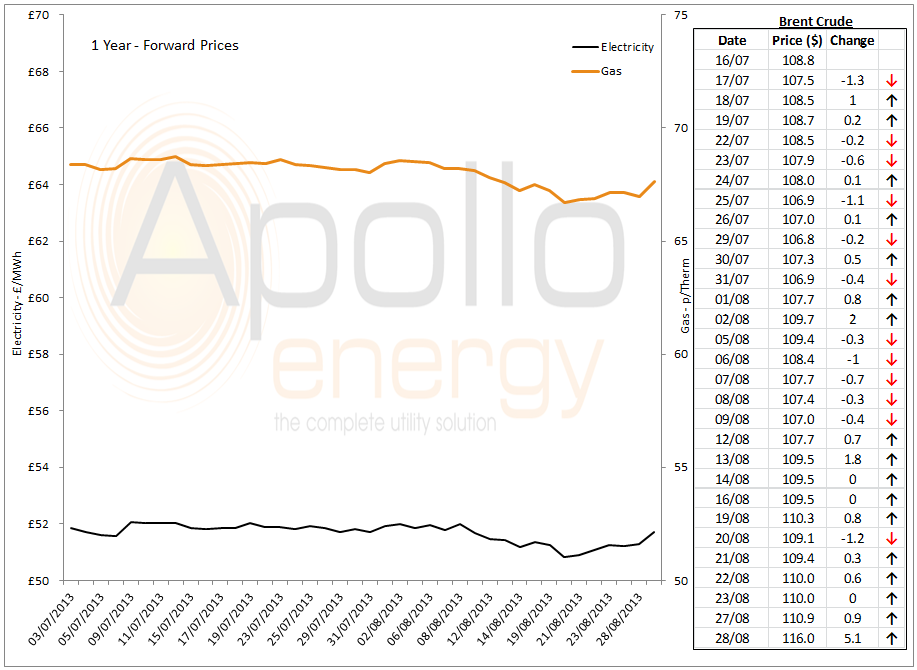 Crude oil prices have climbed significantly as the US attack on Syria is almost certain to go ahead which will have a severe impact on North African oil production. Brent 1st-nearby prices went up by around $4/b yesterday and hit a high of $117/b.