Spot prices are still fairly high as wind generation is still limited although a German nuclear reactor restarted yesterday and solar production is set to improve today. The UK gas system was tight yesterday due to the reduction in storage injections which led to higher September 2013 prices. There were no major changes to the system today and prices are expected to remain stable on the September contract's last day of trading. Today's prices can also be found in an easy to read table on our 'current UK energy price' page.

Day-Ahead gas was unchanged in yesterday's session and closed at 63.90ppt whereas the Summer-14 contract made a gain of 0.40ppt due to continued maintenance in Norway. Storage levels stood at 84% and Rough is around 85% full thanks to the facility's switch to injection mode in April this year. On the power curve, Day-Ahead went up by £0.15/MWh due to higher gas contracts and lower nuclear generation. Wind generation is forecast to improve and a number of power plants are expected to return today which limited the gains somewhat.

The gas curve saw most contracts make a loss this morning as the system opened 20mcm long, Day-Ahead dropped by 0.50ppt while Front-Month and Front-Season both fell by 0.30ppt. Brent prices decreased slightly after making a large increase yesterday and storage flows saw an increase with only one facility currently in withdrawal mode. Day-Ahead power shed £1.85/MWh from its price as the usual drop in demand on Fridays influenced the contract. The rest of the curve displayed smaller losses and took direction from bearish gas, coal and oil prices. Wind production was higher as expected and increased by 2GW while a number of power plants are set to undergo maintenance over the weekend.

Market close data has revealed that the 1-year forward price for commercial gas decreased while commercial electricity went up - closing at 67.48ppt and £51.78/MWh, respectively. This can be seen in the graph below. 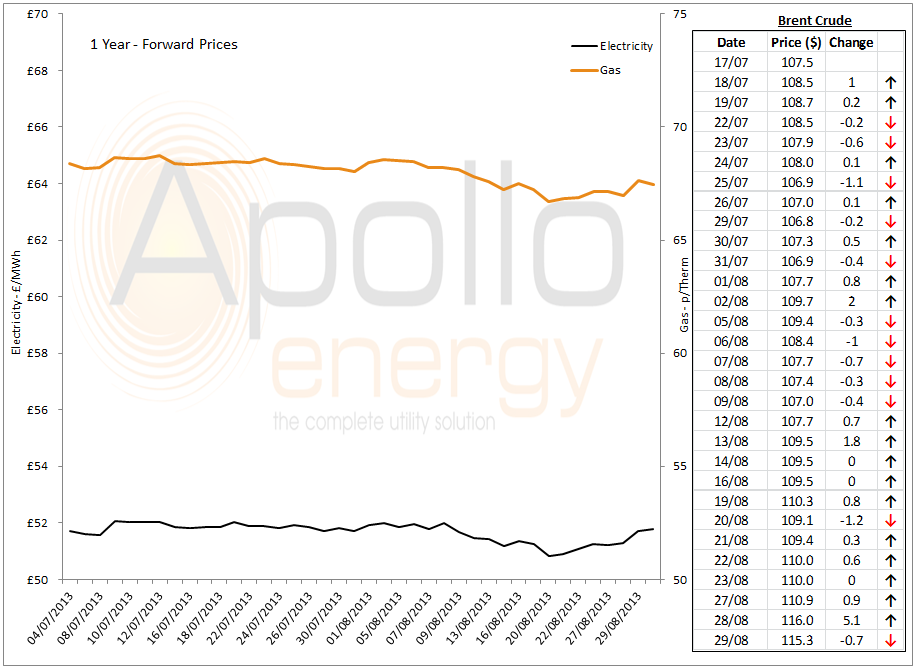 Crude oil prices made a large gain in yesterday's session and were influenced by the on-going troubles in Syria. Brent 1st-nearby prices reached $117/b but fell to around $115/b this morning due to a delay in the US attack.