Spot prices are expected to stabilise over the next few days as the market is currently well-supplied as a result of increased nuclear generation and hydro production hitting a record high in France. Demand is also thought to be low due to a warmer weather forecast.

Day-Ahead gas fell by 0.35ppt as losses were made across the curve with May-13 registering the biggest loss of 0.70ppt. Linepack was at 17mcm long at closing after being short for the majority of the day. The price drop was helped thanks to the UK avoiding a triple dip recession and the US economy not showing much growth. The majority of contracts on the power curve saw losses with May-13 closing at £48.30, Front-Month falling by £0.25/MWh and Front-Season made a £0.50/MWh loss. Day-Ahead dropped by nearly £1.00/MWh even though a number of plants are to undergo maintenance and two reactors at the Sizewell power plant are set to be offline until the end of May.

There was little change on the gas curve with Front-Month making no change and Day-Ahead being the only contract to make a loss, losing 0.25ppt. Linepack opened 20mcm short but had no bearing on prompt prices however LNG flows were at a healthy 45mcm this morning. The power curve saw mixed changes; Front-Month saw no movement to open at £48.40/MWh and Day-Ahead made a loss of £1.30/MWh. Wind generation was at 52MWh and made up 12% of the generation mix so last week's predictions of a significant improvement were proven to be correct.

Market close data has revealed that the 1-year forward price for both commercial gas & commercial electricity made a significant drop over the weekend - closing at 67.15ppt and £51.70/MWh, respectively. This can be seen in the graph below. 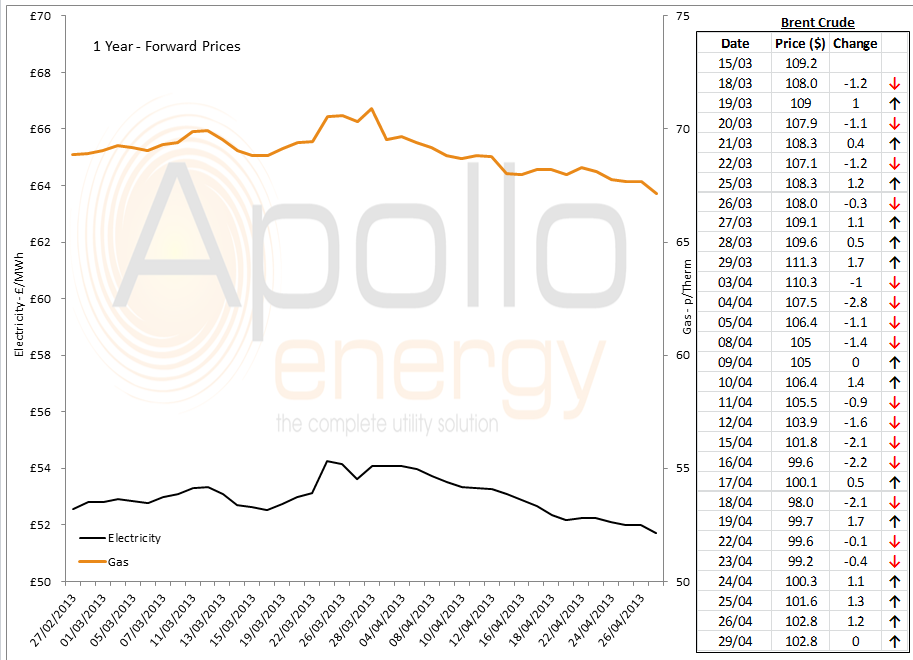 Brent prices remained firm and the Brent/ WTI spread became wider although US gasoline prices bounced back by around 1 $/b. The US Q1 GDP growth was lower than expected which resulted in reduced risk assets, there is also news of a grand coalition in Italy which should have a positive effect on oil prices and risk appetite.