Spot prices are set to take a bullish trend and made gains today as the UK received reduced gas storage injections due to a decrease in Norwegian flows yesterday. Wind and nuclear generation is also expected to drop off from yesterday's levels.

Day-Ahead gas saw a rise of 0.35ppt and gains were seen on the Near-Curve with Front-Month making a gain of 0.40ppt to close at 65.3ppt. LNG flows are expected to be strong throughout May-13 but the gas market is currently being affected by a decrease in gas flows from Langeled which is currently at 37mcm. The Far-Curve also displayed a bullish trend with every contract except Winter-15 making a gain. The Power curve also saw a series of gains with Day-Ahead closing at £49.85/MWh, a rise of £0.95.MWh, June-13 also rose to £49.30/MWh. Higher spot prices and weather temperatures which are expected to be below the seasonal average for the start of May are two contributing factors to the bullish market. The Far-Curve saw mixed changes with Summer-14 making a drop, Summer-13 showing no change and Winter-15 going up.

Prompt gas contracts saw a decrease at the session's opening with June-13 falling by 0.44ppt ignoring the fact storage levels are almost 17% and LNG deliveries are expected. The Far-Curve saw little change with Summer-14 and Winter-14 opening as they closed in the previous session. Day-Ahead and June-13 power both opened at a discount even though wind and nuclear generation is likely to be reduced. There was almost no change in 2014 contracts but 2015 contracts fell slightly despite the rise in spot prices.

Market close data has revealed that the 1-year forward price for both commercial gas & commercial electricity made gains - closing at 67.64ppt and £51.72/MWh, respectively. This can be seen in the graph below. 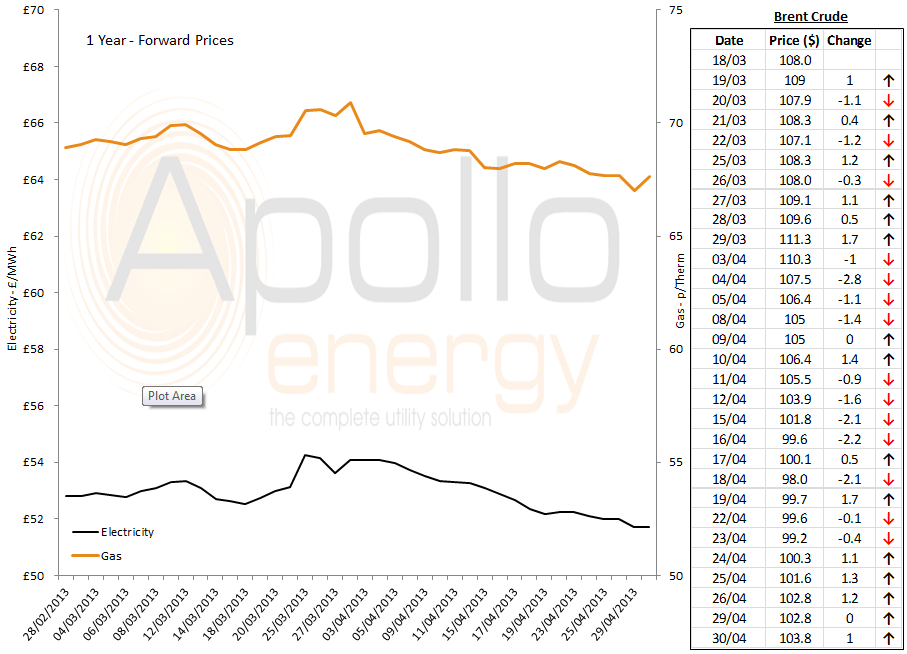 Brent prices made gains yesterday and went above their 20-day moving average as a result of the risk appetite. Risk appetite is expected to be supportive until Chinese PMI is released tomorrow and European Central Bank meetings have taken place. US Crude exports have also climbed to 124 kb/d which is a 13 year high; shale oil production which is being exported to Canada is one of the main reasons for this rise.