Spot power prices increased yesterday after a series of bearish sessions, with a reliance on gas-fired generation a major factor. A drop in generation in some European countries has provided further support this morning and this has resulted in a bullish outlook for this afternoon. Near-curve gas prices moved higher yesterday as a drop in temperatures and low Norwegian supply offered support, meanwhile, movement further along the curve was more varied. A decision will be made in Holland today whether production at the Groningen gas field will be restricted by 2Bcm/year which would result in upward movement for prices. Today's prices can also be found in an easy to read table on our 'current UK energy price' page.

Gas contracts displayed significant increases yesterday due to a weaker British Pound and numerous outages in Norway. A drop in temperatures also increased demand levels and gas-fired generation remained high. However, the UK gas system was long throughout the session thanks to strong LNG send-outs. Power prices also displayed an increase and followed the movement of gas with June-15 climbing to a 10-day high, the July contract also closed at a premium. Further along the curve, upward pressure was provided by a weaker Pound, while seasonal contracts displayed smaller gains due to a drop in fuel prices.

Gas contracts have opened higher this morning due to below average temperatures and low Norwegian imports into the UK. The LNG picture remains healthy with further deliveries expected this week and send-outs continue at a high rate. Traders also await an announcement from Holland on whether production at the Groningen gas field will be cut. Power contracts continue to rise as stronger gas and increased consumption dictate the market. An increase in oil and coal prices also provided support further along the curve, while stronger wind generation helped Day-Ahead to fall which was one of the few contracts to display a loss.

Market close data has revealed that the 1-year forward price for both commercial gas & commercial electricity increased - closing at 46.13ppt and £44.30/MWh, respectively. This can be seen in the graph below. 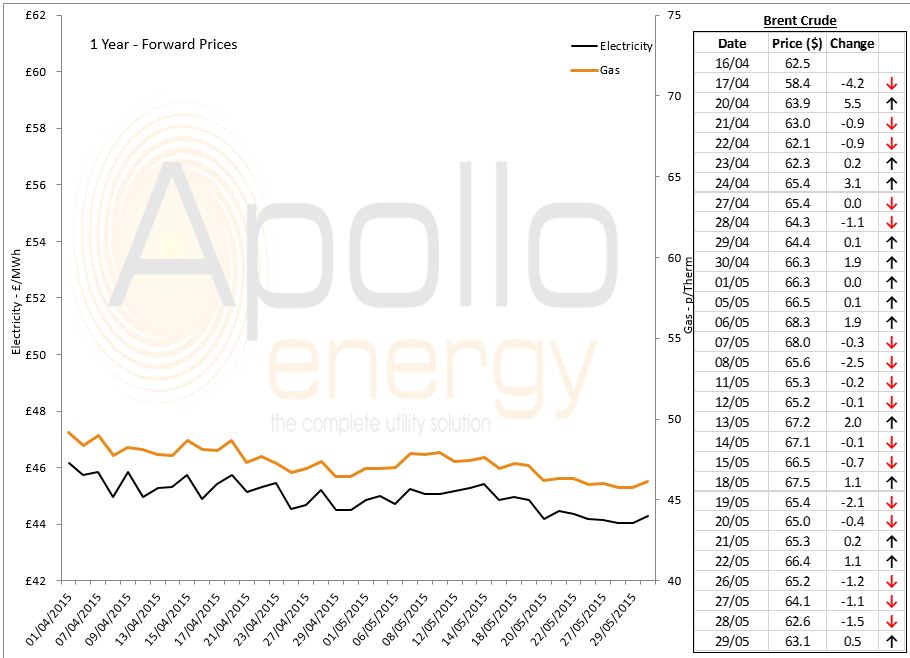 Brent 1st-nearby prices have rebounded this morning after displaying losses in four consecutive sessions, with support coming from a further drop in US inventories; Brent currently trades above $63/b.