Spot power prices have displayed little change in the last few days as generation levels are healthy with improved wind and solar generation expected today. Slightly stronger gas offered some support to prices yesterday but the overall outlook is bearish with the forecast of warmer weather next week. Gas prices increased yesterday due to a drop in Norwegian supply as a consequence of the unplanned outage at the Kvitebjorn field. Supply levels are much more stable compared to yesterday and demand levels have dropped, some downward movement can be expected as a result. Today's prices can also be found in an easy to read table on our 'current UK energy price' page.

Gas contracts moved higher yesterday due to a drop in overall supply levels following an outage in Norway. Production in Europe is generally stable but gas-fired generation still holds a large share of the UK generation mix which provided additional support. The power curve followed a bullish trend and was also influenced by high gas-fired generation as well as a weaker British Pound. Day-Ahead was an exception to the gains and posted a loss on the back of a stronger wind generation forecast and an expected drop in demand.

Near-curve gas contracts are on the decline this morning with a lower demand forecast the main market driver. The supply/ demand picture is healthy as three LNG deliveries are expected to arrive in the UK next week, resulting in higher send-outs. Power contracts have followed their gas counterparts this morning as generation levels are comfortable and warmer weather has reduced consumption. Falling Brent has also helped to weigh on some far-curve contracts with global oversupply resulting in a weak oil market.

Market close data has revealed that the 1-year forward price for commercial gas decreased slightly, while commercial electricity recorded a small gain - closing at 45.78ppt and £44.05/MWh, respectively. This can be seen in the graph below. 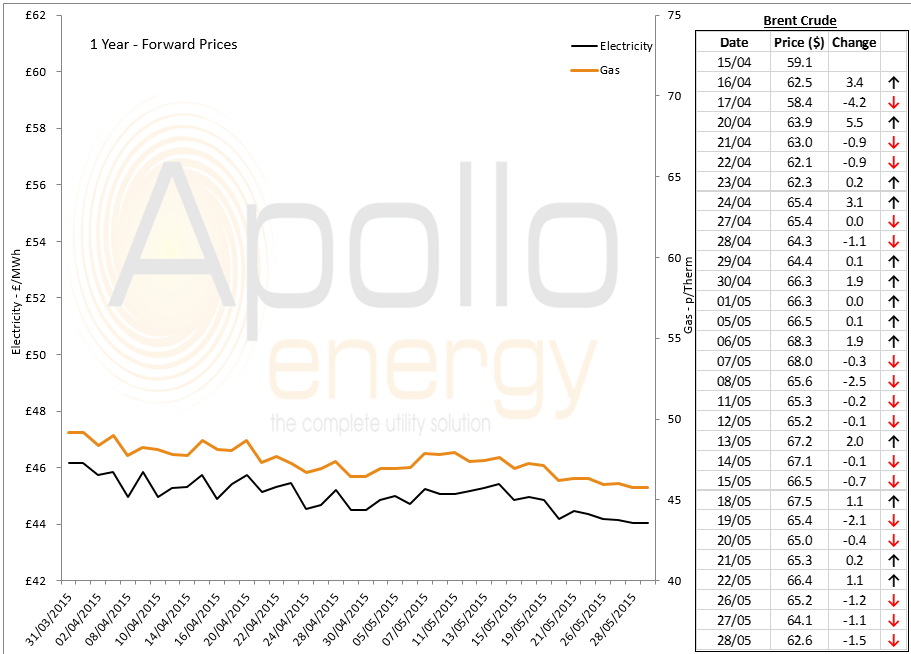 Brent 1st-nearby prices continue to display significant losses and have decreased for the fourth consecutive session, currently trading just above $62.5/b.