Spot power prices are generally bearish this morning as the mild weather is set to continue across Europe, keeping demand levels below the seasonal norm. However an outage at a nuclear power plant in France and weaker wind generation in Germany could provide support later in the session.

Gas prices moved down on Monday as Russia and Ukraine were expected to come to an agreement on gas supply between the two countries and Norwegian supply was healthy. Norwegian flows remain strong this morning and demand levels are lower than expected due to warmer temperatures, resulting in losses. However, exports to Belgium remain high and have contributed to a short gas system, potentially leading to gains this afternoon.

Weaker gas and coal helped power contracts move down on Monday, with losses evident across the curve. Winter-15 hit a record low of £42.96/MWh during the session with falling Brent and strong LNG supply the primary factors. Day-Ahead decreased on the back of lower consumption levels and an expected rise in wind generation.

Current weather forecasts are predicting a mild start to October and gas prices continue to display a bearish trend this morning. However, the UK gas system has opened short this morning as exports to Europe remain strong, restricting some downward movement on the near-curve.

Power prices were lower this morning as most contracts followed their gas counterparts, with weaker demand helping to weigh on the prompt. October-15 also traded down and was influenced by the return of two nuclear power plants in the UK and a healthy wind generation forecast.

Market close data has revealed that the 1-year forward price for both commercial gas & commercial electricity decreased - closing at 40.70ppt and £41.70/MWh, respectively. This can be seen in the graph below. 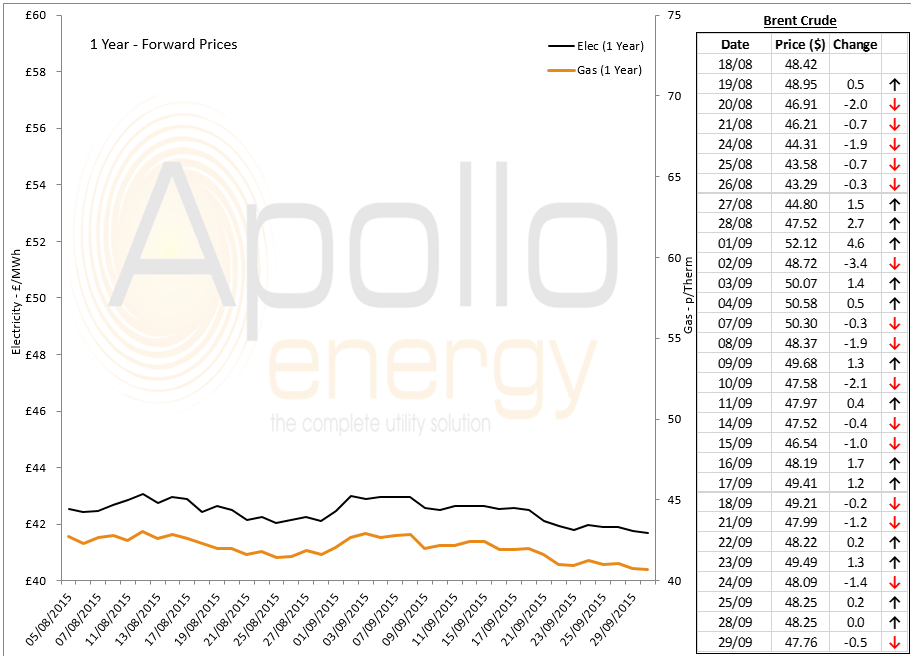 Brent 1st-nearby prices fell by around $1.2/b yesterday with the usual suspects providing bearish pressure, namely a weak Asian economy and high oil production, despite a lack of global demand.