Gas prices increased yesterday afternoon following a bearish start to the session as the UK gas system was short and the Pound weakened against the Euro. A drop in exports to Belgium and lower residential demand has resulted in a long system this morning, helping gas prices to decrease.

The prompt and other near-curve gas prices climbed higher by the end of Tuesday's session as the system fell short and remained so for most of the day. Further along the curve, stronger Brent helped to support some contracts but a below average demand forecast helped to restrict the gains.

A mild start to October is expected based on revised weather forecasts and this helped near-curve power contracts to close at a discount yesterday. However, the losses were minor due to the resistance provided by strengthening gas and oil contracts.

Demand levels are still below the seasonal norm this morning and the UK gas system is over-supplied as a result, weighing on near-curve contracts. A decrease in exports to Belgium also contributed to the improved supply picture, while LNG flows are also strong.

Day-Ahead power has shed from its price this morning on the back of warmer weather and healthy wind generation. The rest of the curve is generally dictated by falling gas, as well as the return of two nuclear power plants in the UK.

Market close data has revealed that the 1-year forward price for both commercial gas & commercial electricity decreased - closing at 40.64ppt and £41.58/MWh, respectively. This can be seen in the graph below. 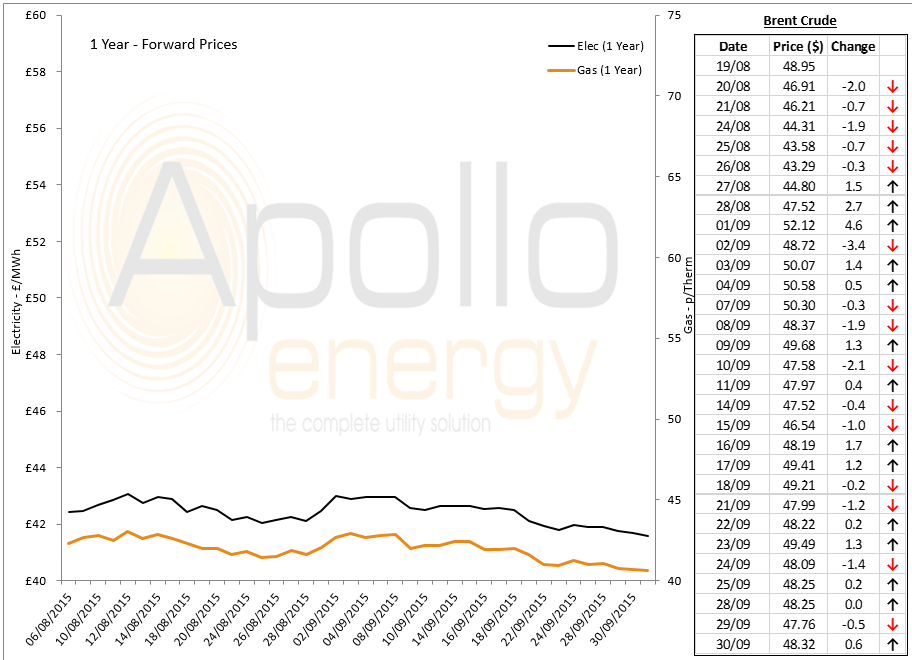 Brent 1st-nearby prices climbed higher yesterday afternoon but recorded a small loss overnight with market uncertainty the cause of these fluctuations; Brent currently trades at around $48.3/b this morning.