Spot power prices continue to move down as a result of above average weather across Europe, with temperatures expected to be 10 °C above the seasonal norm in France and Germany later in the week. In terms of generation, there have been a few outages at power plants in Germany but the overall outlook is healthy. Gas prices moved down yesterday but the losses were restricted by today's gas supply talks in Vienna between the EU, Russia and Ukraine. Those talks continue to have an effect on prices this morning as the two countries attempt to agree a price, the market should be rather stable in the meantime. Today's prices can also be found in an easy to read table on our 'current UK energy price' page.

Gas prices gradually moved higher during yesterday's session following a bearish start as the UK gas system fell short. Exports to Belgium were strong as the interconnector is back up and running, while storage injections also increased. BBL flows were low and the Euro recovered some of its losses later in the day, providing further upward pressure. Power contracts were influenced by the warmer weather forecast for the coming weeks, as well as a stronger Pound against the Euro due to the situation in Greece. Solar generation was expected to increase to around 4.5GW today, while peak wind generation was forecast at around 1.2GW.

Political situations have offered support to the gas market this morning with talks taking place to determine how much Ukraine will pay for Russian gas. Meanwhile, Greece has reached its deadline to repay its debt which has pushed oil prices higher. An above average weather forecast continues to weigh on power prices this morning although bullish gas has helped to restrict some of the losses. An improved renewable generation outlook has helped the Day-Ahead contract to open at a £1/MWh discount.

Market close data has revealed that the 1-year forward price for both commercial gas increased, while commercial electricity recorded a small loss - closing at 45.39ppt and £43.90/MWh, respectively. This can be seen in the graph below. 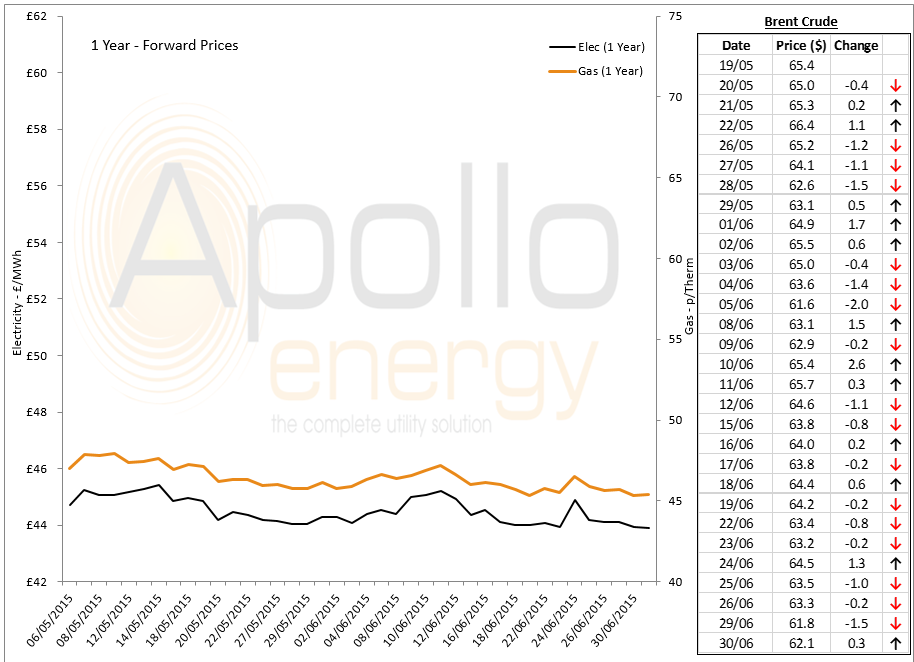 Brent 1st-nearby prices have moved higher today due to a couple of important deadlines, the first being the final day for Greece to repay the $1.77bn worth of loans and the second being the end of negotiations with Iran; Brent currently stands at $62.11/b.