Spot power prices are on the rise at the moment due to a stronger gas market and numerous outages at thermal facilities on the back of increased cooling demand. Meanwhile, a major power cut in Western France put the country's grid under pressure which also offered support. Gas demand in the UK was above the seasonal norm due to a rise in exports to Belgium and an increase in storage injections, while Dutch flows were also reduced; resulting in gains. Exports via the IUK pipeline are close to 100% at the moment and storage injections continue at a high rate, supporting prices this morning. Elsewhere, Russia and Ukraine are yet to reach an agreement which could result in further upward movement. Today's prices can also be found in an easy to read table on our 'current UK energy price' page.

Gas prices ended yesterday's session at a premium due to weaker supply and rising Brent. The UK gas system was balanced despite strong exports and storage injections as warm weather has reduced demand. Further upward pressure came from weaker Dutch flows, while no agreement was reached between Russia and Ukraine. Most power contracts added to their price yesterday with support coming from strengthening gas and oil. The Day-Ahead contract was one of the few contracts to move down as a result of higher wind and solar generation, with warm weather playing a part.

Gas prices continue to rise this morning as demand levels remain high in the UK as exports are close to maximum and a large percentage of flows have been nominated for storage injections. Greece's failure to repay its loan has pushed oil prices higher and on-going talks in Vienna regarding Eastern European supply has provided another bullish factor. The power curve is still dictated by gas and Brent this morning which have been pushed higher by supply concerns and political issues. Weaker consumption has helped to curb some of the gains but an expected drop in renewable generation helped the prompt to open higher.

Market close data has revealed that the 1-year forward price for both commercial gas & commercial electricity increased - closing at 45.73ppt and £44.38/MWh, respectively. This can be seen in the graph below. 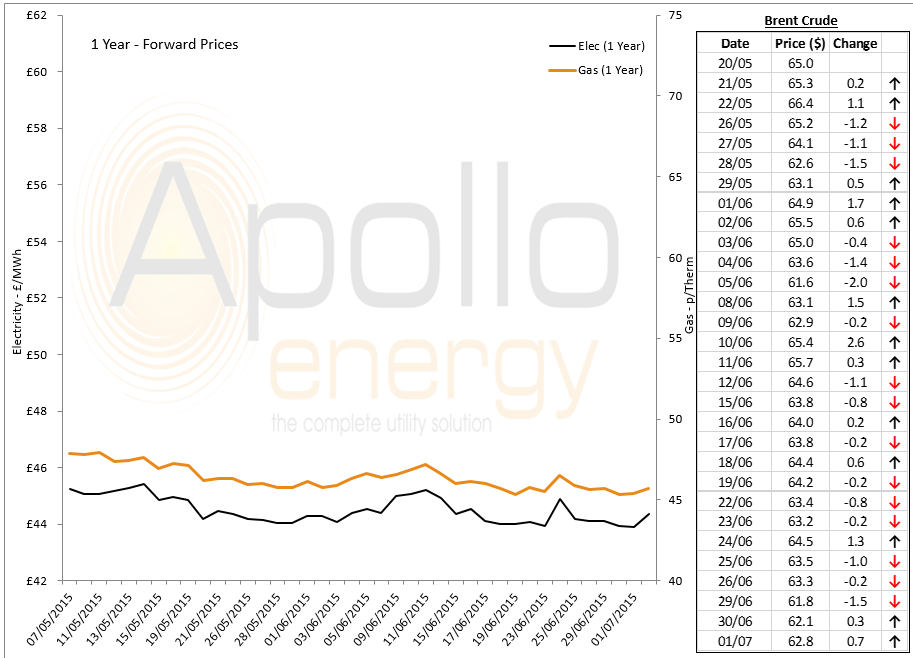 Brent 1st-nearby prices displayed a strong rebound yesterday but moved down over night to settle at around $62.8/b. Greece has become the first western country to fail to pay back a loan to the international monetary fund which has further weakened the Euro against the US Dollar.